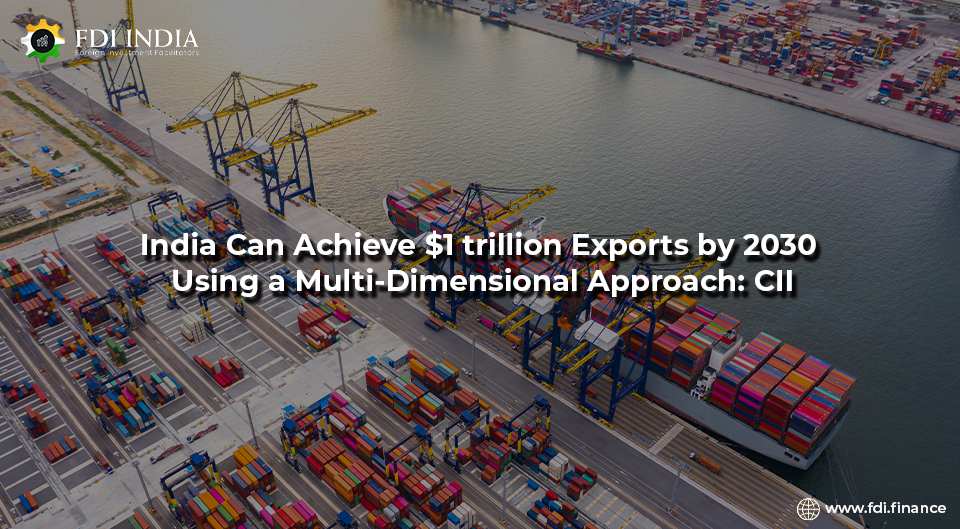 As per a report by industry body CII (Confederation of Indian Industry) has emphasized that India needs a multi-dimensional approach to reach $1 trillion worth of exports by 2030.

The suggestions include finalizing free trade agreements with big markets, getting all exports under the Remission of Duties and Taxes on Exported Products (RoDTEP) scheme, attracting overseas investors and eliminating domestic manufacturing issues.

The CII further said that India needs to merge closely with global value chains and attract higher foreign direct investment (FDI) in the sectors considered the engines of the economy.

“With a holistic and aggressive approach, the aim to achieve USD 1 trillion in merchandise exports by 2030 is indeed achievable if India undertakes a strategic mission,” said T. V. Narendran, President, CII.

The CII has published the report titled ‘Achieving $1 trillion in merchandise exports: A Roadmap’ in which it has highlighted the products and destination markets that the country should focus on and the measures required to meet the target.

The report has determined 41 countries that offer export expansion opportunities and with which trade deals should be prioritized.

“Currently, more than 20 trade deals are under negotiation including those with the UK, Canada, European Union (EU), Australia, United Arab Emirates, and the GCC countries which must be expedited,” the report said.

As per the potential for global expansion, 14 primary products have been identified that can contribute the most to India’s exports.

They include apparel, vehicles, plastics, chemical products, pharmaceuticals, textiles, electrical machinery and equipment machinery among others.

It also mentioned the need to address the non-tariff barriers in the current trade agreements to grant more open market access to investors.

The report further stated that multinational companies must set up their production base in India to make it a vital part of global value chains.