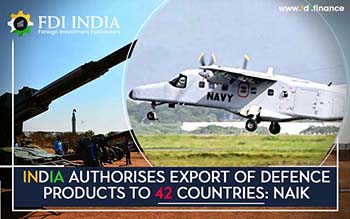 Minister of State for Defence Shripad Naik confirmed earlier this week that the government has sanctioned companies to export military equipment to 42 countries across the globe, including Singapore, United Arab Emirates and Sweden.

He further revealed that 79 companies have invested more than Rs, 1,843 crore via the foreign direct investment or FDI route in the defence and aerospace sectors after 2014.

The 42 countries for which India has received “export authorisation” include Finland, Germany, Australia, Israel, USA, Sri Lanka, and Saudi Arabia among others.

Defence companies in India have also been permitted to by the government to export bomb suppression blankets, helmets, soft armour panels, and cartridges to Germany, said Naik.

Power supply, bulk memory control card are among the other things that are permitted to export to Sri Lanka from India, said Naik.

Radar distribution cards, amplifiers and spare parts for radar systems are among the devices that have been authorised for export to Singapore, he said.