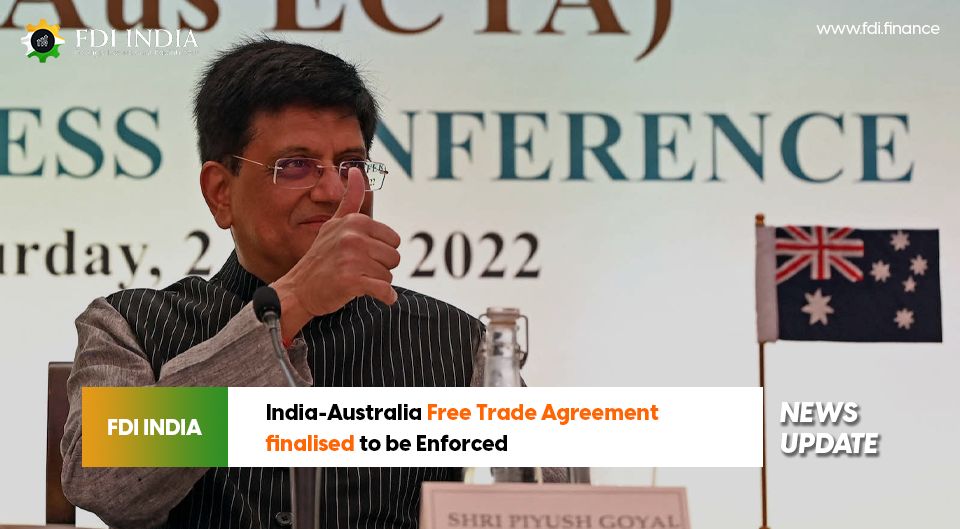 The free trade agreement, which was until now in contention of being finalised, would now be enforced from December 29. The FTA agreement is considered to double the bilateral commerce trade to USD 45 to 50 billion in only five years.

The agreement was signed on April 2 and would provide duty-free access to Indian exporters for over 6000 broad sectors of commodities, including textiles, leather, furniture, jewellery and machinery being produced in the Australian market.

According to the media reports that have tried to gauge the benefits of the trade agreement, Textiles, apparel, agriculture and fish products, leather footwear, furniture, sports, goods, jewellery machinery, and electrical goods would only be some of the labour-intensive sectors that would gain immensely due to the new FTA agreement.

If that was not all, the benefits of the FTA also promise India a zero-duty access for about 96.4% of exports from day one. This covers many products that currently attract 4 to 5 % customs duty in Australia.

Australia has been a profound trading partner to India, whose exports stood at USD 8.3 billion and imports from the country aggregated to USD 16.75 billion in 2021-22. The statement released by the government brought forward the fact that from 29 December, tariffs of about 85% of Australia's exports to India will be eliminated some of the high tariffs on a further 5%of the goods would be phased down.

"Entry into force of the agreement before the New Year delivers a double bonus of two tariff cuts in quick succession: one as the agreement comes into effect and a second on 1 January 2023," it said.

According to the statement released, ECTA, which is the official acronym for the agreement, would also support tourism and workforce needs in the regional Australia by making 1000 work and holiday program places available to young Indians. The pact would further provide opportunities for Indian students graduating to Australia to undertake post-study work with a bonus year of stay for high–performing STEM (science, technology, engineering or mathematics graduates)

The tariff would further help India gain access to Australia's exports of products, including critical minerals, pharmaceuticals, cosmetics, lentils, seafood, sheep meat, horticulture and wine, as reported by the official statement. The agreement is an extension of the belief that the foreign trading partners are ready to impart with the aim of increasing the bilateral trade in-between the nations in India.