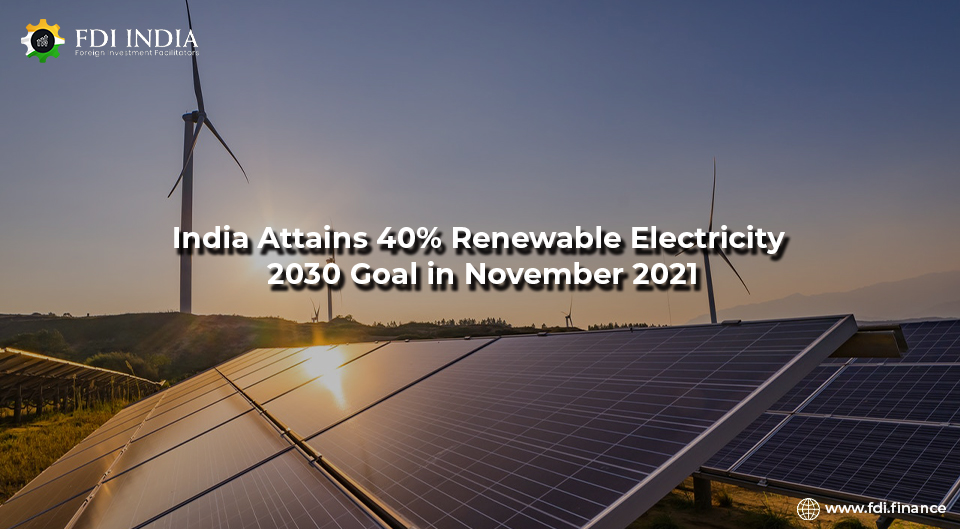 India had resolved to achieve 40 percent of the total installed electricity capacity from green energy sources by 2030, as part of its Nationally Determined Contributions (NDCs) at COP 21.

However, the nation has fulfilled its target well in advance in November 2021, as per a statement by the Ministry of New and Renewable Energy.

The total green energy installed capacity is now 157.32 GW, which is 40.1 percent of the country’s total installed electricity capacity of 392.01 GW.

According to the data provided by the Department for Promotion of Industry and Internal Trade (DPIIT), the Indian ‘Non-Conventional Energy’ sector saw a foreign direct investment (FDI) inflow of an estimated $7.27 billion for the period 2014-15 till June 2021. $797.21 million of this amount came in FY 2020-21.

This latest development aligns with the Prime Minister’s announcement at the recently held UN Climate Change Conference COP26 of installing 500 GW worth of installed electricity capacity by 2030.

A driving factor behind higher levels of foreign investment in the renewable energy segment was the liberalization of the FDI policy for the sector. The reforms allowed foreign investors to collaborate on joint ventures in the industry, with up to 100 percent FDI allowed under the automatic route.

Over the last seven years, India’s renewable energy resources have grown the fastest among major economies. Solar energy rose by more than 18 times, and other green energy sources close to double their previous capacity.

The statement further added that India is rapidly becoming an attractive destination for renewable energy investments. As per the REN21 Renewables 2020 Global Status Report, India saw an investment of $64.4 billion in green energy projects and programs during 2014-19.

$11.2 billion were invested in 2019 alone as new opportunities emerged, and more Indian companies saw the non-fossil energy sector as a tremendous growth segment with a futuristic outlook.