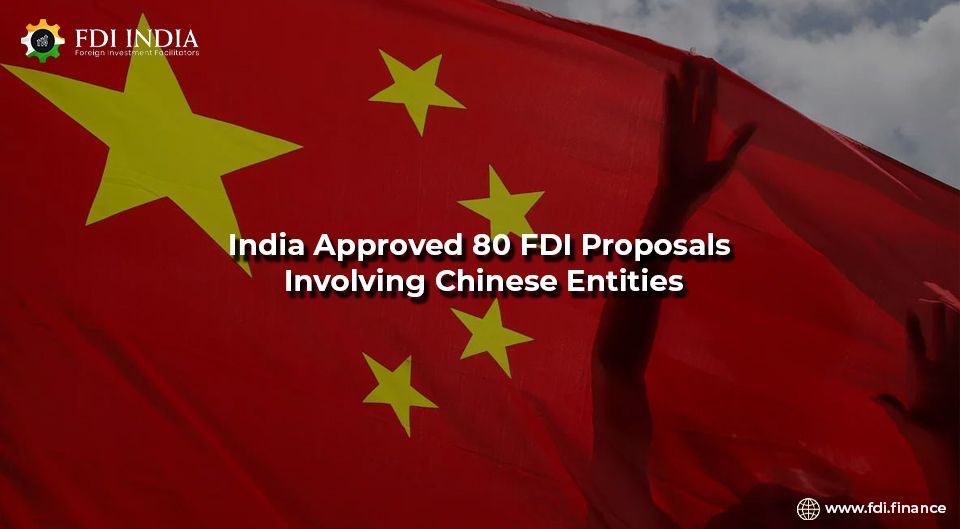 In response to an RTI request, the Indian Government has revealed that they have received 382 proposals from China in recent months after imposing investment restrictions on countries sharing borders with India and out of them 80 FDI proposals had been approved as of June 29. Also, there was no clear data mentioned stating the number of projects that have been rejected as of now.

Following the border skirmish, New Delhi amended the country's investment regulations in 2020, making government approval and security clearance mandatory for any FDI coming from countries that share land borders with India. The government did not grant such FDI approvals until mid-2021. However, it has since begun to consider applications on a case-by-case basis.

Market analyzers said the government is being very cautious when it comes to deciding on proposals for foreign direct investment. Since this happens to be a large political issue in recent years it's no wonder that approvals are slower coming. Besides, the acquisitions that have been allowed by the government so far have mainly been minority stakes and don't seem to result in changes of control in companies. Capital-intensive sectors are being favoured over those sought-after sectors for FDI like e-commerce and financial services.

The government is being very cautious in relation to the profile of the investor. Market participants have said that government officials are going slower on approving investment proposals involving entities closely linked to Beijing. The founders or promoters of investing entities that are known for their closer ties to current ruling dispensations are also involved in some of the above-mentioned applications.

The ministry is taking very careful steps in approving the applications from the politically involved personnel from China and Hong Kong as they do not want to let the Chinese entity get any board representation or control tools due to various security reasons said an industry expert.

While approvals are beginning to trickle in, at last, the government is also taking action to ensure that Indian companies won't be under Chinese influence. Just recently, the Ministry of Corporate Affairs announced a slew of measures to ensure China's influence doesn't seep into any more than it already has.