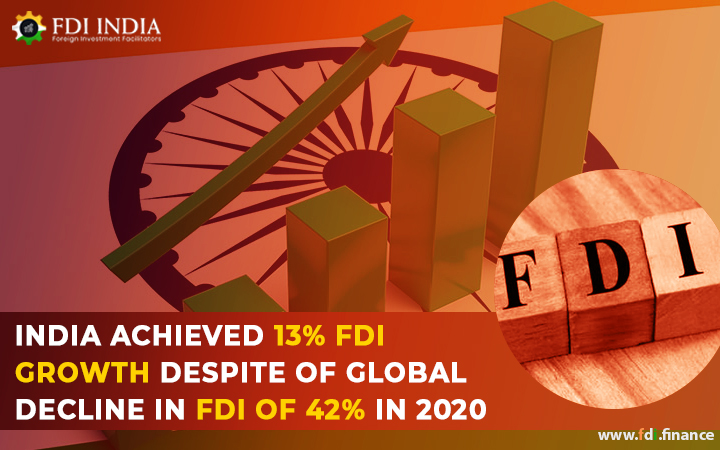 India grabbed global foreign investment trends with a drastic increase of 13%, despite global FDI crashing in 2020. The FDI decline was 42% which was estimated at $859 billion from $1.5 trillion in 2019. According to the Global Investment monitor, United Nations Conference on Trade and Development stated, FDI collapsed in 2020 much more than financial crises in 2009. The fall was intense in the developed nations, where FDI flow was decreased by 69 per cent as estimated 229 $billion. The flow of Europe has deteriorated to $4 billion consisting of wide negative flow in the developing countries. A sharp decline was observed in the United States to $134 billion dollars. On the other hand, FDI in India raised by 13 % enhanced by the digital sector in 2020.

The decline in developing countries was determined at 12 per cent to an estimate of $616 billion. The share of the global economy reached 72%, which was observed as the highest record. The drop in FDI flow in the developing countries was uneven, 37 per cent in Latin America and the Caribbean, 18 per cent in Africa and 4% in other developing nations. East Asia was the largest host zone, accounting on the one-third of the global FDI. FDI in the transit economy was decreased by 77%. According to the report, the FDI is anticipated to be weak in 2021. As per the data, it indicates a forward trend and indicates a mixed picture of the downward pressure.

The lower Greenfield project suggests that the industrial sector is not in sight. The decline was declared in the international financial sector which consists of the 2 percent of the entire year. Risks related to the pandemic, pace the vaccination programme and insubstantial microeconomic situation in major sectors will continue to affect FDI in 2021.