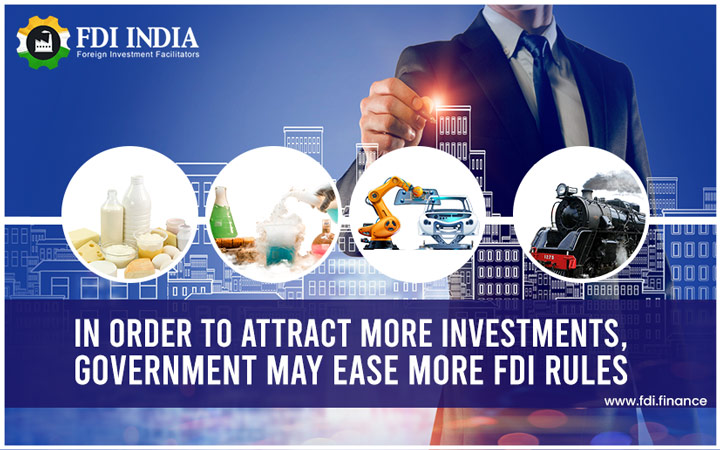 It has been weeks since Government has eased the Foreign Direct Investment rules and now it has again begun to review to ease it further in order to attract more foreign investments. The sectors and segments under the Automatic route appeal to more overseas investors so as to revive the investment cycle.

The department for promotion of industry and internal trade (DPIIT) has begun an internal exercise so as to recognise any extra sectors to be touted under the automatic route. An official said, “While most sectors are already on the automatic route, we are seeing if there is further scope.” In the last month only, rules for sectors like digital media, coal mining, single-brand retail were cleared and on the other hand standards for the segments of insurance business were changed by the finance ministry.

There is a visible change in the rules regarding FDI. The Government has eased the rules for nearly all the sectors and only a few are left under the Government route. Defence and telecom are such sectors where up to 100?I is permitted but external funding that exceeds 49% requires prior permission from the Government. Brownfield investment in healthcare, pharmaceuticals and biotechnology requires prior approval if FDI surpasses 74%.

According to a report, only nine sectors are there where FDI is prohibited. This includes real estate, atomic energy & railway operations, chit funds & ‘nidhi’ companies, and lottery, gambling & betting.

Almost every sector is coming under the Automatic route that allows investors to just inform the RBI after the investment. For the same reason, the government is thinking to increase the inspection in order to have an idea of such money inflows. Regarding the same, a source said, “There are concerns over money from China going to the North East and in some sectors that are strategic. The idea is to keep tabs on such investment without discouraging them.”

This issue of knowing about any overseas money inflows was raised before the last set of Cabinet clearances. DPIIT was in discussions with the Reserve Bank of India and this discussion concluded to a questionnaire that investors need to fill and report FDI allowed under the automatic route. Also, many more queries need to be answered.