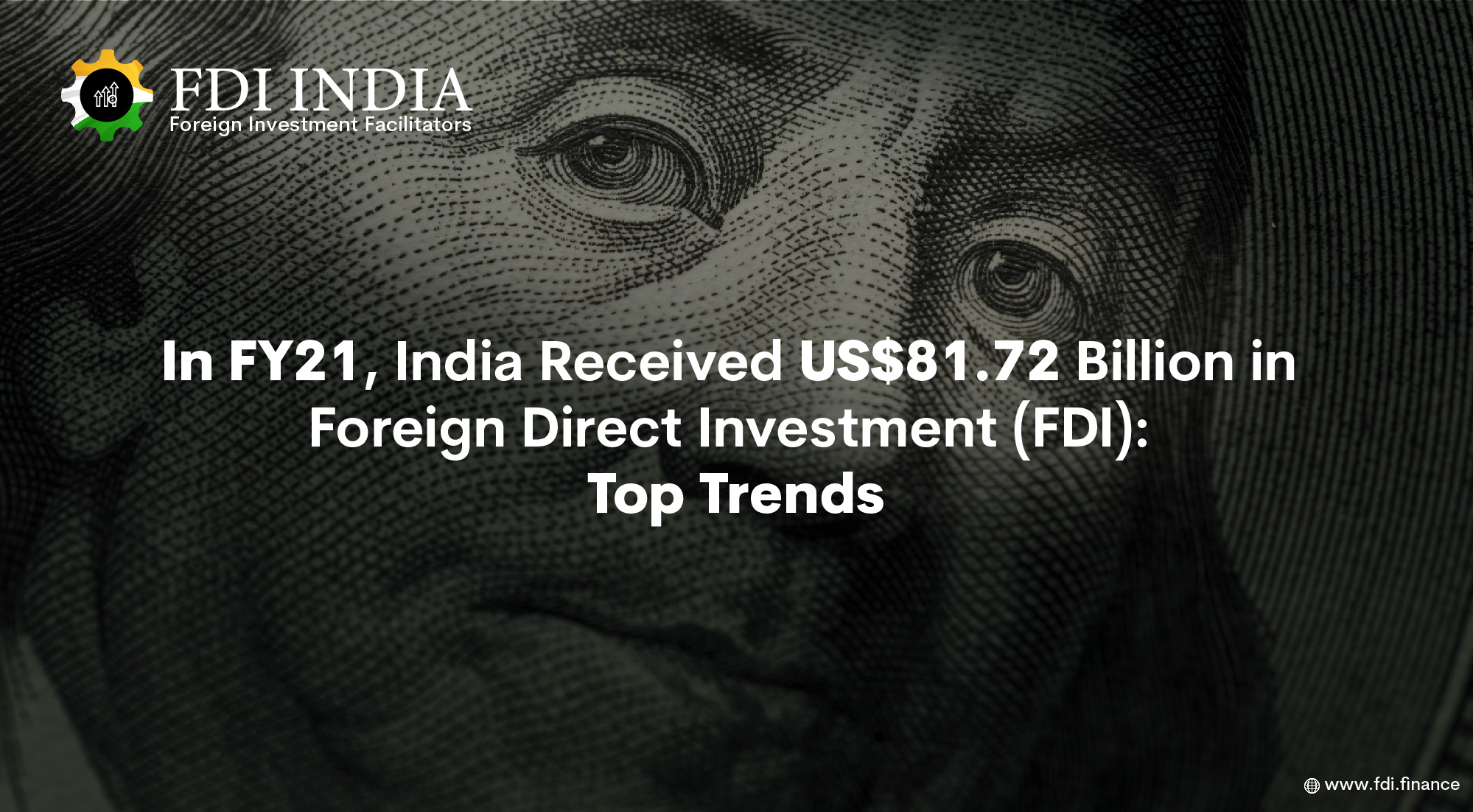 In the financial year (FY) 2020-21, the total inward FDI into India reached a new high, totaling US$81.72 billion. Total FDI, which comprises equity, capital, and re-invested earnings, increased by 10% over the previous fiscal year's total of US$74.39 billion.

According to the federal government, this increase in FDI inflow can be attributed to several government-led facilitative policies and reforms to make India a favored global investment destination. Between FY 2015-16 and FY 2019-20, total FDI inflow into India increased at a compound annual growth rate (CAGR) of 6%.

In FY21, how much FDI did India receive?

Out of the overall FDI inflow of US$81.72 billion received by India in FY21, FDI equity inflow contributed US$59.64 billion. Inward FDI equity increased by 19 percent over the previous fiscal year, when it was US$49.98 billion.

The majority of this influx (US$51.47 billion) came in over the first nine months of FY21, from April to December 2020, with the most significant increase in August 2020.

In FY21, which nations were the most active investors in India?

Singapore was India's leading foreign investor in FY21, accounting for US$15.71 billion in FDI equity from April to December 2020. Singapore was responsible for 29 percent of India's FDI inflow. The United States was India's second-largest foreign investor, accounting for 23% of all FDI. The amount of inward FDI equity from the United States surged 227 percent over the previous financial year. Mauritius became India's third-largest investor in FY21, with a 9% stake.

However, a review of cumulative FDI inflow numbers from April 2000 to December 2020 reveals that Mauritius has been India's leading source of FDI equity inflow over the past two decades. In FY21, the UAE, Cayman Islands, Netherlands, Japan, the United Kingdom, and Germany were top investor countries.

Saudi Arabia became the top investor in terms of % growth in FDI received in FY21 over the previous year, with an investment of US$2,816.08 million compared to US$89.93 million in FY20. Compared to last year, the UK raised its contribution of FDI equity into India by 44 percent.

What were the leading FDI-attracting sectors in FY21?

Several reasons have led to this rapid surge in foreign investment, including quicker digitalization, expanded use of artificial intelligence (AI) to overcome constraints posed by the pandemic, and increased policy focus on manufacturing in India. This tendency is projected to be accelerated by the recently implemented production-linked incentive (PLI) schemes.

Construction (infrastructure) activities, which received 13% of FDI equity inflow in FY21, and the services industry, which received 8%, were two prominent sectors that attracted investors. Rubber goods, retail dealing, medications and pharmaceuticals, automobiles, and electrical equipment were among the promising sectors that experienced more than a 100 percent increase in inequity in FY21.

Telecommunications (-94 percent) and hotel and tourism (-94 percent) have suffered the most significant declines in inbound FDI inflows compared to the last fiscal (-84 percent). In FY20, FDI into the telecommunications sector totaled US$4.44 billion, while in the first nine months of FY21, it was only US$357 million.

In FY21, which Indian states attracted the most foreign direct investment?

Gujarat (37 percent), Maharashtra (27 percent), and Karnataka (13 percent) received the most FDI equity, followed by Delhi and Tamil Nadu. In FY21, these states contributed 92 percent of India's total equity inflow (April-December). This percentage was 81 percent in FY20. Despite the pandemic, Gujarat remained India's top investment destination for the fourth year in a row, garnering US$30.23 billion in FY21. The majority of the FDI capital went towards computer software and hardware (94%) and construction projects (two percent).

Gujarat is known for its dependable logistical networks and industrial infrastructure, bolstered by technological improvements throughout the supply chain. Inflows of FDI into Delhi, on the other hand, have slowed in comparison to past years.

India received its highest-ever FDI inflow in FY21, despite a significant slowdown in global outbound investment. The only other country that has seen an increase in foreign investment is China. The technology, energy, and infrastructure sectors in India have absorbed this expansion. India needs more foreign capital to achieve its aims of manufacturing self-sufficiency, participation in global value chains, and reduced trade dependence. It's no surprise, then, that state governments and federal administrations are pushing for various incentives and inducements to help international investment.

The World Bank's Doing Business ranking of 63 in 2020 is a significant improvement above the 2014 score of 142. This achievement was made possible by reforms such as digitizing bureaucratic departments and creating a single portal for trade facilitation.

With a widespread push for adopting emerging competitive technologies, India has made a clear commitment to digitize its economy. India ranked 48th in the International Institute for Management Development's World Digital Competitiveness Rankings for 2020. In recent years, India has seen a steady increase in telecommunications investment.

India has become one of the world's most hospitable start-up ecosystems thanks to increased investment in technology infrastructure. Bengaluru and Delhi were highlighted in the Global Start-up Ecosystems Report (GSER) for 2020. India has made significant progress, rising from 81st place in 2015 to 48th place in 2020.

India has a diverse and capable basis for manufacturing a wide range of products. By 2022, India is predicted to surpass China as the world's third-largest building market. India has also established the National Infrastructure Pipeline (NIP), a multi-billion dollar program that includes commercial and social infrastructure projects. It is being hailed as a first-of-its-kind program to build world-class infrastructure across the country, with primary beneficiaries including energy, highways, trains, and urban development projects.

The federal government has announced several policy measures and FDI relaxations in a variety of sectors. Implementation of the Goods and Services Tax (GST) and the Insolvency and Bankruptcy Code are two major developments. The government has also developed PLI plans in 13 priority sectors in order to make them more globally competitive. The incentives are based on increased sales of items in specific segments, and they are expected to bring in a lot of foreign money.

Due to its inherent advantages – a large market with a relatively younger population, democratic setup, investor-friendly reforms, increased pace of urbanization, steady rise in rural consumption levels, and a sustained increase in disposable per capita incomes – India remains a popular international investment destination. Nonetheless, the pandemic has wreaked havoc on the country, slowing development on several indexes. Global investors will be looking to see how India's economy recovers after a devastating COVID outbreak and how it implements vaccination programs and returns to normalcy.