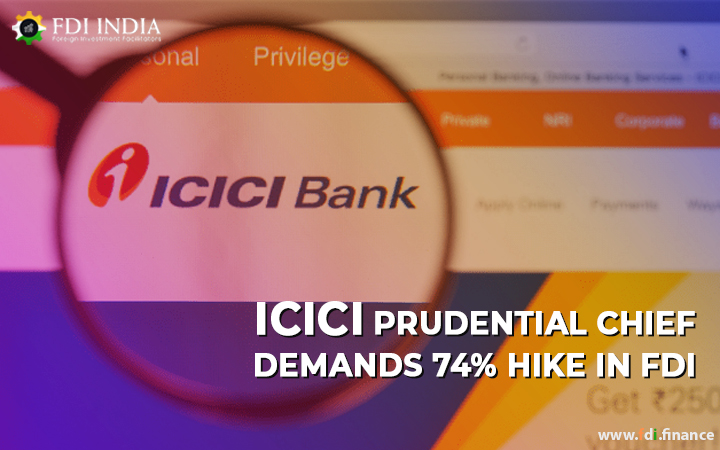 In order to ease the restrictions on foreign involvement in the market, the Head of ICICI Prudential Life Insurance, one of the largest private insurance firms, made strong argument. The need for higher foreign investment prevails and at a time when many Indian developers of small firms are looking for a better time to leave the joint ventures they formed.

ICICI Prudential MD & CEO N S Kannan claimed that the insurance regulator did not impose limitations on new entrants and gave licenses to numerous types of promoters, including solely digital firms. Speaking at an event organized by the National Insurance Academy. However, no licensing request was pending.

“India is seen as a good investment destination despite the pandemic. Given that there is easy liquidity around the world, it is a good time to increase the foreign direct investment (FDI) from 49% to 74%. If 100% foreign investment is allowed in non-banking finance companies (NBFCs) & asset management companies (AMCs) and 74% stake is allowed for banks, why cannot 74?allowed for insurance companies?”

He says that it was necessary to integrate international capital into a sunrise market, since it would take a lot of capital to sustain solvency margins. Any of the smaller exit players may also be acquired from their international partner. Kannan's call arrives in the midst of 20 years of liberalization for the insurance sector

It was commonly believed that international investment would be comfortable in the future at the time of liberalisation. Many corporate giants were associated with the hope that smaller businesses will become active in the future.

While the Government has lowered international restrictions from 26 to 49 percent a couple of years back, new regulation is now being implemented, which makes it less appealing for multinationals to Indian and regulated insurance firms. Since then, insurance space has become an environment in which private equity and international institutional managers showed interest. But the ceiling of 49 percent used by the international collaborator has delayed them.