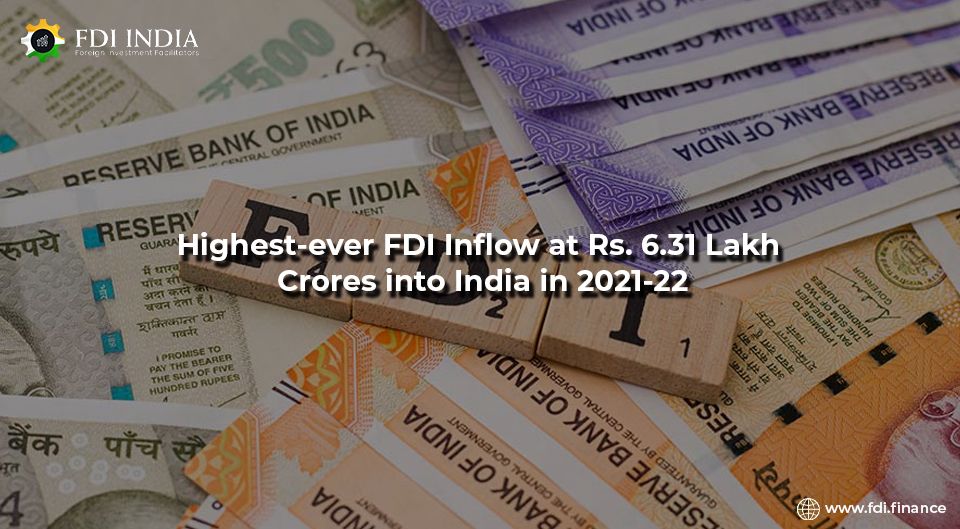 According to an official statement by the Commerce and Industry Ministry, India received the highest-ever FDI (foreign direct investment) inflow of Rs. 6,31,050 crores for the financial year 2021-22. Singapore accounted for the maximum FDI inflows, contributing 27.01 percent of the total FDI inflows.

The largest contributors to FDI inflows into India after Singapore were the US (17.94 percent), Mauritius (15.98 percent), the Netherlands (7.86 percent), and Switzerland (7.31 percent).

A statement by the Commerce and Industry Ministry said that India’s monetary and fiscal policies have been formulated to lower inflation levels and manage the current account deficit. Monetary and fiscal adjustments are made under this overarching framework to address upcoming economic concerns.

According to the UNCTAD World Investment Report (WIR) 2022, which contained a detailed analysis of global FDI inflow trends, India has climbed up a rank to reach the seventh position among the top 20 host economies for the year 2021.

The Reserve Bank of India (RBI) played a significant role in enhancing forex inflows. They took measures like exempting investments by FPIs in G-Secs and corporate debt made till October 31, 2022, from the short-term limit.

A policy has put in a policy for attracting foreign direct investment (FDI), wherein most sectors are open for 100 percent FDI under the automatic route, except for some strategically important sectors.

Foreign portfolio investors witnessed an outflow of Rs. 1,22,239.83 crores in 2021-22, despite India seeing an FDI inflow of Rs. 6,31,050 crores. This outflow can be attributed to the uncertainty in global economies, causing investors to move to the US for safe investments. This outflow was further heightened due to the Ukraine-Russia war.