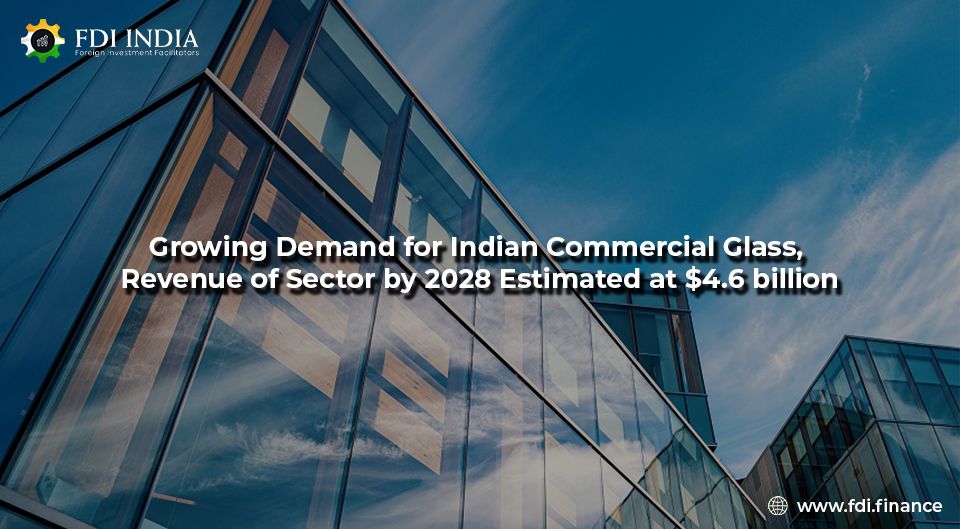 A detailed report titled ‘India Commercial Glass Market’ by Kenneth Research has laid out its analysis of the industry’s regulations and the value chain during the forecast period of 2021-2030.

The report also includes its findings on the latest market trends, in-depth analysis of the operating companies and their production estimates.

The glass market finds its maximum usage in the construction industry. The construction sector is expanding quickly with the support of the measures taken by the Indian government for developing commercial infrastructure such as smart cities.

As per the numbers published by the National Investment Promotion and Facilitation Agency, the construction industry is expected to touch $1.4 trillion and become the third-largest construction market in the world by 2025.

The sector was the second-largest recipient of foreign direct investments (FDI) and is anticipated to contribute 13 percent to the nation’s GDP by 2030.

Till June 2021, 2734 out of the total 5956 projects under the Smart Cities Mission have been completed. The expanding infrastructure requires various construction materials such as commercial glass, among others.

The glass market’s revenue in 2020 was $2.5 billion and is estimated to reach $4.6 billion when 2030 ends, growing at a CAGR (compound annual growth rate) of 6.42 percent during the forecast period.

The growth of the commercial glass market is also aided by the requirement for the manufacture of solar panels. India is fast-tracking its renewable energy adoption with significant progress over the last few years.

According to stats by the Indian Brand Equity Foundation (IBEF), renewable energy usage has increased 2.5 times between 2014 and 2021. Additionally, the Ministry of New and Renewable Energy had announced the Rooftop Solar Program Phase II in July 2021.

The scheme encouraged rooftop solar (RTS) systems to be deployed across India. The initiative also targets 4000 MW RTS capacity in the residential space by 2022.

New Industrial Areas to be Set Up in Eight Districts: Karnataka Minister