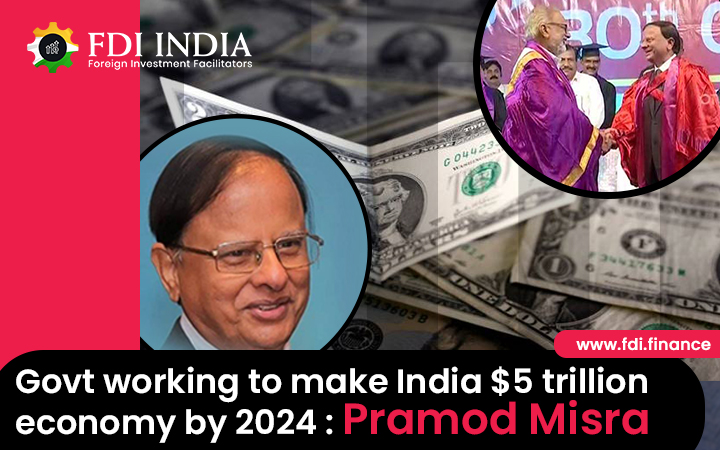 As per a top official, the government of India is working hard to realise Prime Minister Narendra Modi’s dream of making India a 5 trillion dollar economy by the year 2024. The official also said that steps have been taken in order to overcome this phase of economic slowdown.

Pramod Kumar Misra, Principal Secretary to the Prime Minister said that several initiatives are being taken in accordance to Modi’s vision of a ‘New India’. While addressing the 30th convocation of the Sambalpur University, Misra said, "On the economic front in particular, the prime minister has set a goal of becoming a five trillion dollar economy by 2024. While this is an ambitious aspiration, we are on track and fully committed to the same.”

Misra, calling India’s economic fundamentals strong said that the annual average GDP growth of 7.5 per cent during 2014-2019 was the highest since independence.

It was also the highest among the G20 countries, he said.

According to the official, "Macro-economic stability during the last five years has been the bedrock on which various reforms have been rolled out. We have kept the inflation low, fiscal spending disciplined, and current account deficit under control."

"While several fundamental and path-breaking reforms have been undertaken in the form of Insolvency and Bankruptcy Code and GST, continuous opening up and liberalisation of foreign direct investment have resulted in unprecedented inflows of FDI into the country," he said.

Talking about the slow-down of GDP, Misra said that there was a slow- down in global growth of output and the effort to bring about transparency and improve governance may also have caused transitory disruptions.

Displaying confidence on the government, he said, "On the whole, given the strong fundamentals, landmark clean-up drive and ambitious reform agenda initiated, India is set to grow at a much faster pace in the coming months and years. Immense economic opportunities are unfolding for all of you."

The government has taken several steps this year in order to attract more investors to invest in India. This effort comes after the country witnessed a dip in overseas investment equity inflows for the first time in 6 years. The 1 per cent decrease in FDI led the government to introduce reforms in existing FDI norms. The centre sanctioned these reforms across several sectors such as digital media, single brand retail trade, coal mining, aviation, and contract manufacturing.