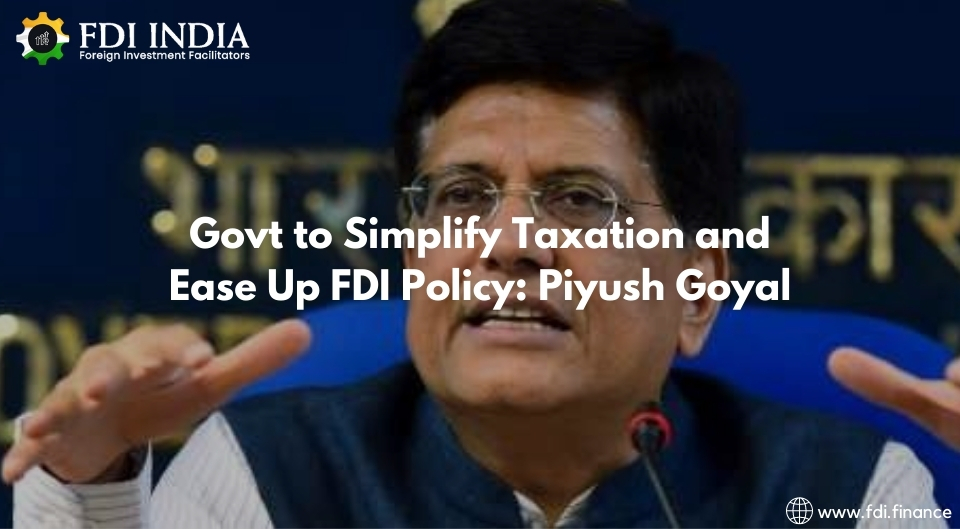 While addressing the 46th Annual General Meeting and India Ideas Summit of the United States – India Business Council (USIBC), Piyush Goyal, Minister for Commerce and Industry and Minister for Consumer Affairs, Food and Public Distribution, stated that India was working to boost investment, streamline its tax regime, liberalise its FDI policy, and encourage invention, innovation, and research and development.

He discussed India's strong relationship with the US and its significance for a free, open, inclusive, and wealthy Indo-Pacific region.

The conference was titled 'From Recovery to Resurgence: Reflecting the Growing Importance of Global Economic Recovery in the Face of Emerging Healthcare Issues and Technological Trends'.

Speaking about a proposed National Infrastructure Pipeline, he said that India is striving to increase investment, simplify its tax system, liberalise its FDI policy, and promote invention, innovation, and research and development.

According to Union Minister Goyal, the world today views India as a dependable and trusted partner as well as a driving force in the global economy. Appreciating USIBC for providing 'Unity, Strength, Inclusion, Boldness, and Commitment' to the India-US relationship, he praised its 46-year efforts to serve as a bridge for the development of strong India-US commercial connections.

He said that the India-US relationship has evolved into a worldwide strategic partnership as a result of our convergence on bilateral, regional, and global problems, and that Prime Minister Modi and President Biden have been aggressive in strengthening our ties. Referring to Prime Minister Modi's recent visit to the United States for the Quad Leaders' Summit, as their first in-person encounter was very productive.

Concerned about the growing trust gap in the post-Cold War world, the Commerce Minister emphasised the need of a robust India-US partnership. Noting that India is a significant US defence partner, he also urged for various discussions in the areas of energy, health, commerce, and innovation to strengthen our business-to-business partnerships and offer better services and opportunities to the peoples of both nations.

He said that India is presently negotiating free trade agreements with like-minded countries such as Australia, the United Arab Emirates, the European Union, and the United Kingdom, and that India has been concentrating on boosting 24 areas in which it has a competitive and comparative advantage.

Union Minister Goyal said that the world now looks to India for its openness, possibilities, and development, noting that India now has the world's third biggest startup ecosystem.

Noting that India has advanced from 'Make in India' to 'Make in India for the world,' he said that India is developing its domestic industry and would provide excellent products at a cost-competitive price.

India-US cooperation has a leadership role to play in addressing a variety of problems, from pandemics to climate change. "India and the United States must use our complementary capabilities in technology, finance, production, and supply chain management to expand collaboration in electronic manufacturing, fintech, education technology, pharmaceuticals and health care, and biotechnology, among other areas," he said.

The Commerce Minister described the United States of America as a natural ally of India, adding that with a common vision, the two countries can become genuine partners in their people's development and prosperity.