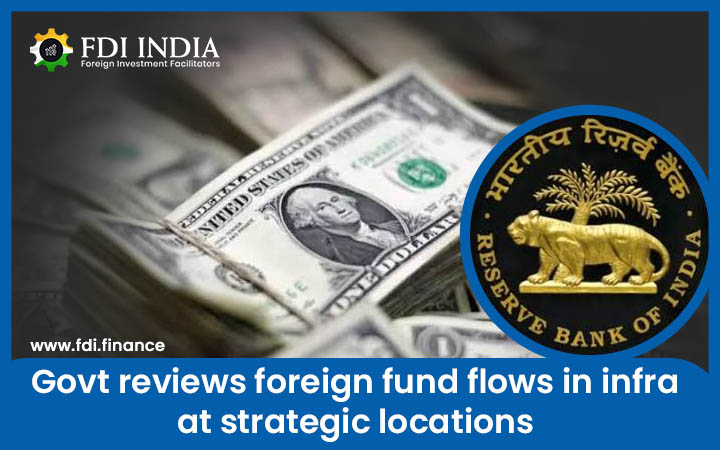 As per sources, the government has commenced examining the flow of foreign funds in telecom and physical infrastructure at strategic locations across the country.

The sources further added that a complete evaluation has been undertaken by the government to analyse the control over several infrastructures at strategic locations and border areas of the nation.

Due to the fact that most of the sectors of the Indian economy are open for foreign direct investment (FDI) under the automatic route, rather than the government route, it is necessary to have an idea about the overseas presence in these areas including the north eastern regions.

Given its strategic importance, the government decided against closure of the state owned telecom company Bharat Sanchar Nigam Ltd. The company has a strong network at border areas.

Several ministries and agencies have been involved in this process, including the Reserve Bank of India (RBI). The RBI will also be further scrutinising the foreign direct investment equity inflows coming in through the automatic route where firms are only requited to inform the regulatory bodies about the fund inflow within a given time.

Recently, Piyush Goyal, the Commerce and Industry Minister said that any country discriminating against Indian companies in the award of contracts would not be permitted to take part in public procurement contracts.

"When we took the stand not to be a part of RCEP (Regional Comprehensive Economic Partnership), one of the major stumbling blocks was also the fact that our businesses in the areas of our strength do not get an equal and fair opportunity when it comes to engaging with contracts or businesses in other geographies," he had said.

The minister further said he had not heard that China ever opens up any of its government contracts. "They (China) are never opened up for international competition in the garb of being public procurement. In many other ASEAN (Association of Southeast Asian Nations) countries, even Japan and South Korea, the kind of conditionalities that they put do not allow too many of our companies to participate in tenders in those countries," he said.