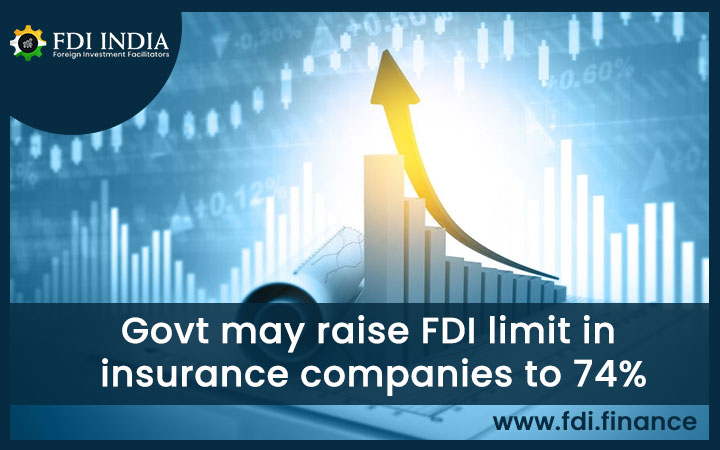 Govt May Raise FDI Limit In Insurance Companies To 74%

Govt May Raise FDI Limit In Insurance Companies To 74%

As per sources with knowledge about the matter, the government of India may raise the foreign direct investment limit for insurance companies to 74 per in the upcoming budget for February 2020. This increase from the previous 49 per cent may pave the way for foreign control of companies.

In December, in a letter at the insistence of the government, The Insurance Regulatory and Development Authority of India (IRDAI) sought the views of different stakeholders in this matter. The latter addressed to several insurance companies and others has called for suggestions on raising the limit of foreign direct investment.

According to a person involved in the discussion, “The government is seriously contemplating opening up the sector as it wants long-term stable money to be invested in the country. IRDAI is seeking inputs from industry people on government instructions and a report is expected to be submitted soon.” They further added, “If all goes well, the government is planning to introduce this as part of the budget announcement and take a shortcut so that it gets Parliament’s nod as part of the Finance Bill.”

The sources also revealed that it has been suggested that the FDI limit can be raised to 74 per cent over time. However, foreign insurers are keen on raising this limit without any delay.

In September, the government had raised the limit of insurance intermediaries to 100 per cent.

In 2015, the government had raised foreign direct investment limit in the insurance sector under the automatic route to 49 per cent from 26 per cent. Before this relaxation, for investments up to 49 per cent, an approval from the Foreign Portfolio Investment Board (FPIB) was required.

As per the 2015 Insurance Act amendment that increased FDI limit to 49 per cent, ownership and control had to remain with the Indian residents. Hence, earlier it was possible for offshore strategic partners to have significant control rights, including reserved matters or veto rights on operational and financial policy decisions of the joint venture.

In her maiden budget of 2019, Finance Minister Nirmala Sitharaman had proposed further relaxation of foreign direct investment in the insurance sector.

In order to increase the overseas investment limit in insurance companies, the government will have to make changes in the Insurance Act, amend provisions pertaining to Indian ownership, monitor the solvency of foreign firms so that the local business is unaffected by any challenges faced by the parent and that they stick around to honour long-term contracts, said the people cited above.

The sources further added, “The experience with foreign banks has been very mediocre as they have unwound business in India after their global operations took a hit. And, since insurance, especially life, is a long-term liability and the government will have little power over foreign-owned entities, it has to be very careful before taking such a call.”