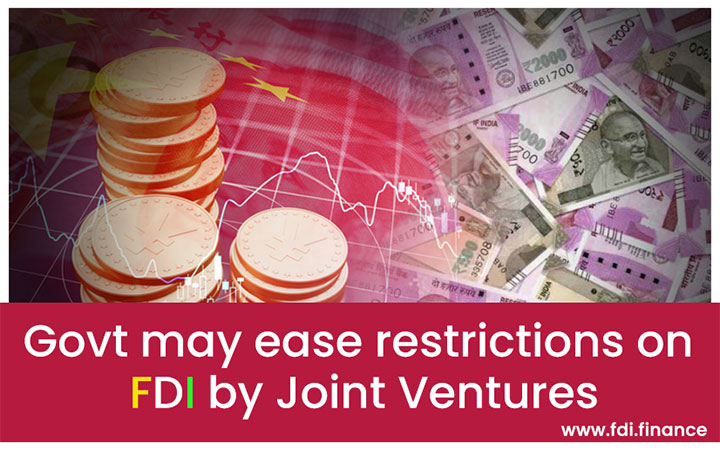 Govt May Ease Restrictions on FDI by Joint Ventures

Govt May Ease Restrictions on FDI by Joint Ventures

The government of India is likely to ease restrictions on foreign direct investment by joint ventures (JV’s) or wholly-owned subsidiaries (WOS) of an Indian firm without terming such investments as “suspect” involving ‘round tripping’ of funds. These new norms come in an attempt to ease the inflow of overseas funds into genuine and legitimate business activities.

As per the existing legal framework of Foreign Exchange Management Act (FEMA), foreign direct investment by an overseas joint venture or wholly-owned subsidiary of an Indian party is not permitted without a prior approval from the Reserve Bank of India. There are restrictions in place for Indian entities (individual or company) who want to undertake overseas direct investment or ODI in a foreign entity which already has existing FDI investments in India.

According to officials, there new norms will be introduced soon in existing overseas direct investment. New norms will put such investments (FDI and ODI) under the automatic route.

Under the automatic route for foreign investments, no prior approval from the government and concerned ministries is required.

In trying times of economic slowdown and the resultant lack of investment by the corporate sector, these norms are critical. The strict policies adopted by the Reserve Bank of India (RBI) in order to prevent ‘round tripping’ have visibly had an impact on Indian companies which have made ODI outside India with an aim if attracting FDI in India.

As per sources, the Department for Promotion of Industry and Internal Trade (DPITT) is also analysing the report before finalizing changes.

This year has introduced several reforms in terms of foreign direct investments. After a dip in FDI equity inflows of 1 per cent, the government of India sanctioned several reforms in FDI norms across various sectors of the economy, including digital media, single brand retail, contract manufacturing, coal mining, and aviation.