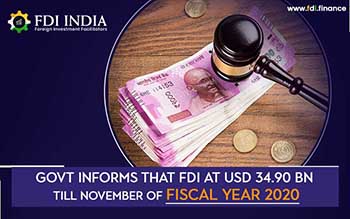 NEW DELHI: Parliament informed on Tuesday that the Foreign Direct Investment (FDI) in India has been increasing on a yearly base. Till the month of November of this financial year, it was at USD 34.90 billion.

While speaking during the Question Hour, Thakur pointed out that despite being a contraction in FDI inflows globally, it has significantly improved in India over the past decade, reaching USD 62 billion. This accounts for 2.37 percent of India’s GDP in the last financial year.

He then said that through the increased FDI inflow and an increase in Gross Fixed Capital Formation, there was a visible success of the various initiatives taken by the government. He further added that the government’s several other measures will boost FDI further in different sectors. After seeing the measures by the government to promote the ease of doing business, amendments in the FDI policy and the introduction of Bankruptcy Code and Insolvency among many others have gained the confidence of the foreign investors, said Anurag Thakur.