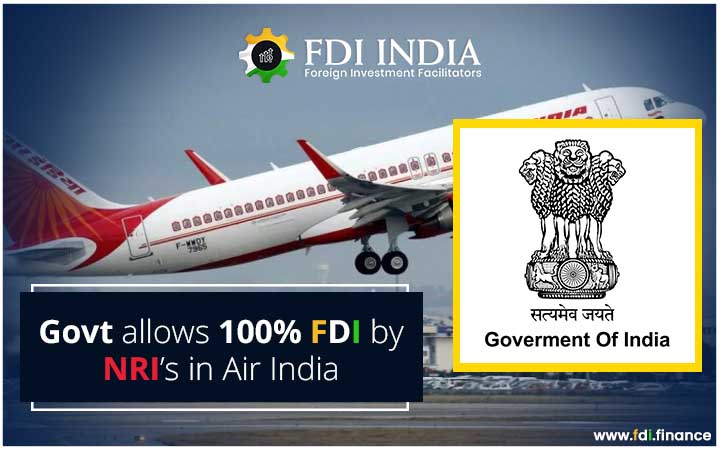 100 per cent foreign direct investment in Air India by non-resident Indians has been approved by the Union Cabinet.

As per current FDI norms, 49 per cent was allowed in the company. The new 100 per cent investment by NRI’s will not be violating the SOEC norms since the investments will be treated as domestic investment.

Norms of the Substantial Ownership and Effective Control (SOEC) govern the airline industry globally. As per these norms, an airline with foreign operations should have a substantial domestic ownership.

FDI norms in India state that the government permits 100 per cent foreign direct investment in scheduled airlines up to 49 per cent under the automatic route of approval. Beyond this limit, an approval from the government is required.

As per reports, bids for the debt-ridden airline will conclude on 17 March.

The government hoped tom sell off 100 per cent of Air India. Previously, the government’s attempt to do so has failed.

The government expects to sell off 100 per cent of Air India, 100 per cent stake in its low-cost arm Air India Express and 50 per cent in ground handling joint venture AI-SATS.

Under the new disinvestment plan, the highest bidder would be taking over debt worth Rs 23,286.5 crore while the liabilities would be decided depending on current assets at the time of closing of the transaction.