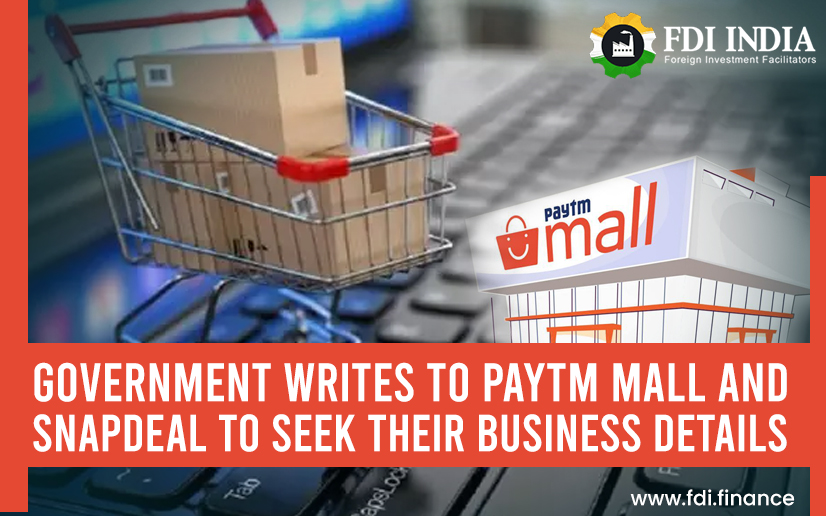 After writing to Flipkart and Amazon, the Government has now written to two other e-commerce platforms, Snapdeal and Paytm Mall in order to seek information regarding their business sales.

The Government wanted the details of their selling practices so as to know what big discounts these platforms are giving to its customers to attract them. It was a similar step that they took last month writing to Amazon and Flipkart when many offline retailer complained that they were giving heavy discounts which not only is a violation of foreign direct investment (FDI) policy but also was harming their business.

DPIIT-The Department for Promotion of Industry and Internal Trade has tried to collect information about top sellers on Snapdeal and Paytm Mall and what all schemes they offer to their vendors. An official of the Government said, “We have written to large companies that have foreign direct investment-...we want to see what practices they are following.”

The questionnaire that was sent last month to the e-commerce platforms, is now slightly altered and through that questionnaire, they will seek out the information on sellers, investment and schemes offered to SMEs and top sellers.

The Government official said, “While e-commerce may only have a small market share in the country’s retail segment, in some segments such as electronics it had a significant share.”

While Snapdeal is yet to respond to this, a spokesperson of Paytm Mall said, “We confirm that DPIIT has shared a questionnaire with us which is generic in nature and has been shared with all e-commerce companies. We have answered the same in the format prescribed.”

Piyush Goyal, commerce and industry minister, told the Rajya Sabha that any violation regarding the FDI norms will be dealt by the penal provision of FEMA (Foreign Exchange Management Act). He said, “Some representations have been received in this department, complaining that e-commerce companies are offering deep discounts, indulging in predatory pricing, engaging in B2C business, exercising control over inventory and influencing the prices of goods sold on the platform.”

It is being informed that the amended questionnaire will help the Government to differentiate between non-compliant and compliant answers.

As reported by the Economic Times, when they asked if the questionnaire asked about the discounting models, investment and structure of the company, the Paytm spokesperson said, “The questions are in the nature of the queries as indicated by you. We, however, do not confirm if the list from you is inclusive of all questions, nor can we confirm that all your stated questions are in the questionnaire from the department

The spokesperson went further on and said, “As a pure-play e-commerce marketplace which is fully compliant with all rules and regulations in letter and spirit, we expect our responses will be satisfactory to the DPIIT.”