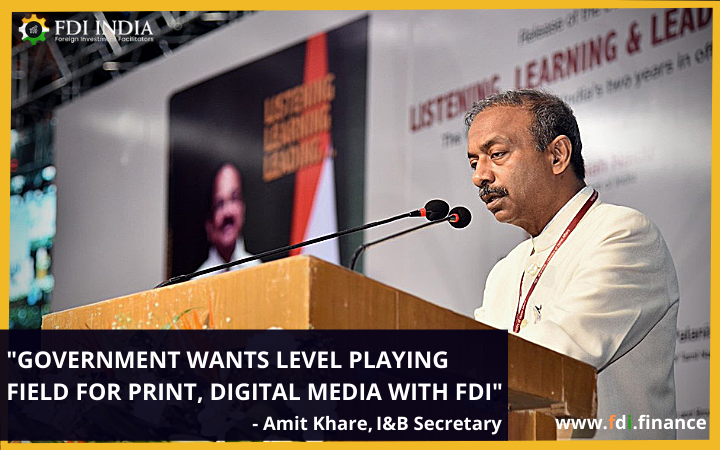 Information and Broadcasting (I&B) Secretary Amit Khare said that the government is trying its best to bring more freedom for the different media platforms and is also the one looking to obtain a “level playing field” for the print as well as digital media in terms of foreign direct investments (FDIs).

The Union Cabinet had earlier approved about 26 per cent FDI for digital media platforms, which was earlier applicable only to the print media. 49 per cent of the FDI is applicable for news channels.

The five-day online convention globally, which began on Tuesday, covers various aspects of the media and entertainment sector, and is widely attended by the industry stakeholders and the government policy-makers from India as well as overseas.

“The entire last six years of the government focused on ease of doing business and having less but more effective regulation,” he said, also adding that the idea is to bring about some of the few regulations which can change the course of media and broadcast forever.

The I&B ministry is amending many of the already existing rules and Acts, such as the uplinking and downlinking guidelines on satellite TV channels, and the PRB (Press and Registration of Books) Act.

Given the fact that it is important to converge the ministries into one, it is important that all the content shared on digital platforms must also come under the purview of Ministry of Electronics & Information Technology.

Khare, added that the I&B Ministry is trying its best to offer utmost freedom to the media and entertainment industry, and work as an educator as well as facilitator rather than a regulator. In a nutshell, the ministry wishes to become a facilitator.