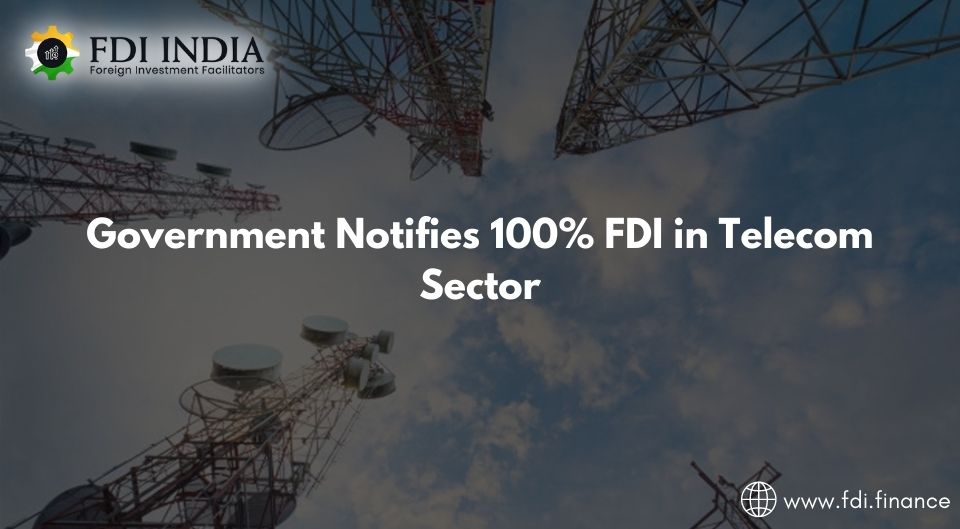 The government announced on Tuesday that it would allow 100 percent foreign direct investment (FDI) in the telecom services industry through the automatic method.

As part of its comprehensive telecom package, the Centre had already promised 100 percent FDI in the telecom industry through the automatic method.

Only 49% of FDI was permitted via the automated method before recently, and everything beyond that had to go through the government channel.

This comes more than a year after the union government announced amendments to the FDI regulations in April 2020, requiring prior permission of the government for foreign investments from countries bordering India, such as Pakistan, China, Bangladesh, and Nepal, among others.

In several industries, the Centre has already approved FDI via automated channels. Foreign investors must get government permission in areas such as defence, media, pharmaceuticals, and insurance.

Under the new FDI policy, all telecom services, including infrastructure providers, would be included.

With a number of reliefs, including a four-year moratorium on dues and the possibility for the government to convert dues into equity once the moratorium period ends, the government has breathed new life into the debt-ridden telco.

Foreign investment in telecom services will be subject to the conditions of News Note 3 of 2020, according to a press release from the Department for Promotion of Industry and Internal Trade (DPIIT).

As a result, situations that need prior government clearance under the terms of Press Note 3 will remain in effect.

According to Press Note 3, an entity of a nation having a land border with India, or where the beneficial owner of an investment in India is located in or a citizen of such a country, may only invest via the government route.

Since the rescue measures for the strained industry, shares of telecoms Vodafone Idea and Airtel have been under spotlight. Today, Airtel's stock fell 1.33 percent to 689 rupees, while VI's shares fell 1.73 percent to 11.35 rupees.