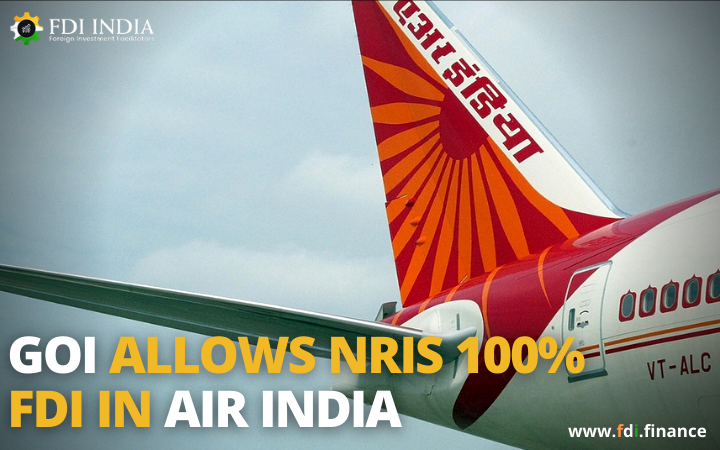 NRIs (Non-resident Indians) will be able to obtain a 100% stake in Air India according to the recent notification given by the Finance Ministry. Changes have been made in the foreign direct investment policies and the allowance has been given for foreign investments in Air India.

In a notification, the Department of Economic Affairs said "Substantial ownership and effective control of M/s Air India Limited shall continue to be vested in Indian Nationals as stipulated in Aircraft Rules of 1937".

Only for the NRIs that are Indians, foreign investment will be allowed up to 100% percent without the government’s approval that is through the automatic route. The foreign investments in Air India will not be allowed of over 49% whether it is directly or indirectly. This amendment has been made for the non-resident Indians and this gives them a new opportunity to invest in the Indian Airline.

The steps taken by the government earlier for the disinvestment could not attract as expected therefore amendments were made in the FDI norms in March and had received the approval of the Union Cabinet which gives allowance to NRIs for bidding for 100% shares in Air India.

Prior to this amendment, the NRIs could only invest 49% in Air India but now the government has put its stake in Air India for sale as NRIS will now be able to buy 100% shares in the airline.

Department of Economic Affairs said, "Foreign airlines are allowed to participate in the equity of companies operating Cargo airlines, helicopter and seaplane services, as per the limits and entry routes".