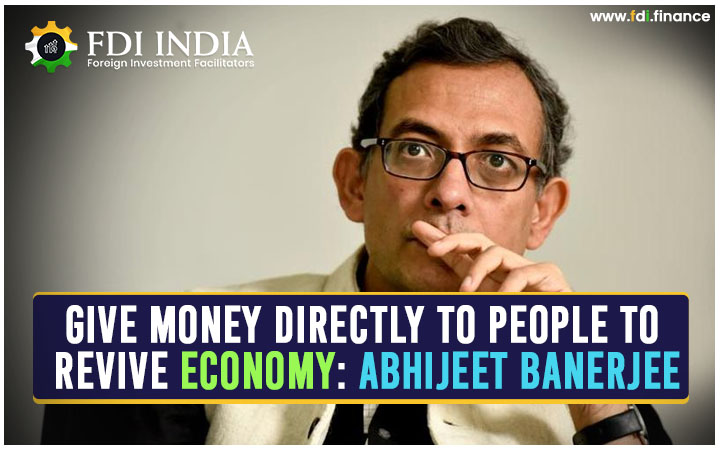 Give Money Directly to People to Revive Economy: Abhijeet Banerjee

Give Money Directly to People to Revive Economy: Abhijeet Banerjee

On Tuesday, Nobel laureate Abhijit Banerjee said that in order to save the economy from being hit hard by the nationwide COVID-19 lockdown, India should consider a big stimulus and give cash in hand to create demand and prevent chains of bankruptcies.

During a conversation with former Congress president Rahul Gandhi, he said, “India needs a stimulus package. We have not dedicated a large enough financial package yet.” Adding, “Spending is easiest way to revive economy. It will have stimulus effect.”

Banerjee was the latest to join Gandhi in his series of conversations with global and Indian thought leaders to discuss the coronavirus crisis and its consequences on the Indian economy.

The Indian-American economist said the government should issue temporary ration cards for three to six months for every person who needs food grains to save their lives. “Use those ration cards for transferring money, wheat and rice to them,” he added.

Speaking about the migrants in particular, Banerjee said: "One of the ideas that was mooted in the last years of the UPA but also embraced by the current government was the idea that the Aadhaar would be made national and therefore would be used for Public Distribution System and other things. Aadhaar-based claims on PDS would make one eligible wherever they are. That would have been wonderful to have right now.”

He emphasised that it was important to  to revive demand. “Nothing bad will happen if we give money to bottom 60%. But to give direct cash transfer to only poorer people is debatable,” he said.

Abhijit Banerjee is an world renewed economist who won the 2019 Nobel Prize in Economics, along with Esther Duflo of the Massachusetts Institute of Technology and Michael Kremer of Harvard University “for their experimental approach to alleviating global poverty”.

Earlier, Rahul Gandhi had a conversation with former Reserve Bank of India (RBI) governor Raghuram Rajan who also suggested that the government should  transfer cash directly to the poor and supply food through the public distribution system (PDS) to as many people as possible in order to mitigate the impact of the coronavirus pandemic on the economy.