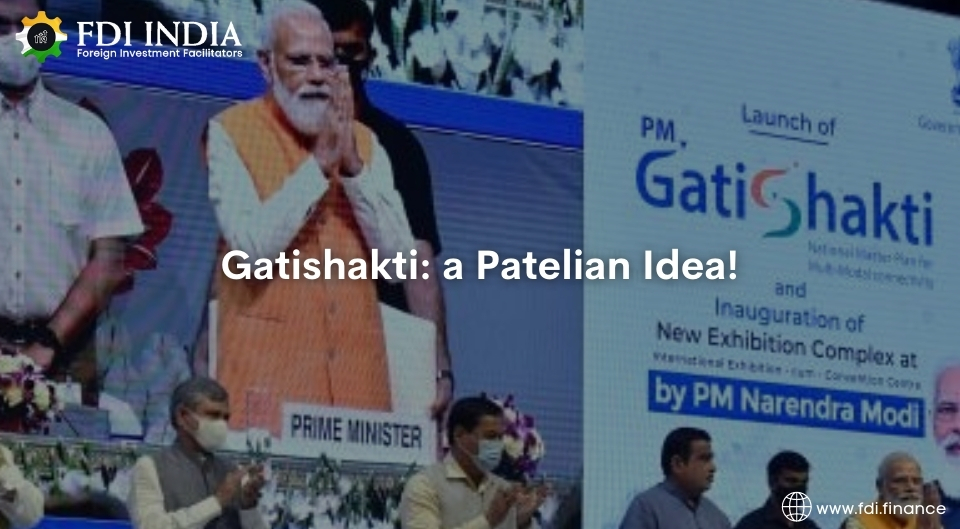 Sardar Vallabhai Patel, the first deputy prime minister of Independent India, prepared for a winter he knew was approaching in Kashmir in only eight months in 1947-48. Patel, ever foresighted, took a military approach to building telecommunications connections between Srinagar and Delhi.

He was the one who pushed for the construction of the Jammu-Pathankot road, which required the use of 70 special trains and a labour force of 40,000 to complete the 90-kilometer route with 17 kilometres of bridges and culverts.

Of course, his concerns were realised, and India benefited much from his insight. Only because Patel had full control over all of the different components (and departments) needed to finish the project was it feasible.

There are two concepts here that are important to grasp in order to appreciate the significance of GatiShakti skillful coordination in the construction and usage of infrastructure to foster national unity and shared purpose.

GatiShakti brings together an understanding of where India is in terms of infrastructure and where it needs to go on one platform. This is necessary not just for smooth project coordination between states and industries, but also, perhaps more importantly, for a stronger feeling of sovereignty.

In India, infrastructure has always been built in a 'pocket method,' as I like to put it. This implies that issues are discovered or emphasised in certain target areas, and remedies are executed 'exclusively' in those areas.

This may have some unexpected results. For example, on a road that may need general maintenance, one or two potholes may be repaired quickly, and frequently in such a hurried way that the craters resurface in much larger proportions at the first hint of rain.

This is only one tiny illustration of a much larger problem. The absence of a centralised store of knowledge and actionable detail results in the classic infrastructure storey of the same road being built year after year.

GatiShakti addresses these problems by establishing a cartographical vision and imagination in which demands and delivery schedules from throughout the country may be monitored and executed using a single command-and-control method. Duplication would be reduced, as would other issues such as local financial mismanagement and project delays.

It would also assist link key economic regions to state and national infrastructure, avoiding the issue when an economic zone is planned but the supporting infrastructure is not yet ready.

GatiShakti is expected to accomplish for infrastructure what financial technology has done for monetary transactions and disbursement: it will provide a comprehensive understanding of what is required, where it should be delivered, and how it should be provided in the most effective way.

Productivity leaps at every level will be required in India's next phase of development, and these leaps would be impossible to achieve without technology interventions that collect and analyse data. Furthermore, until such a universalist approach is adopted, fast investment deployment would be impossible.

As India attracts ever-increasing amounts of foreign direct investment, timeliness of transaction and deployment will become more important. GatiShakti is significant for this reason.

The concept of sovereignty is the last element on GatiShakti. India is in the process of settling its last sovereignty problems. For the country's next phase of development and security, it needs a strong feeling of national togetherness. This entails thinking holistically rather than in silos, and assisting Indians in comprehending their nation and its problems as a whole.

"Manpower without unity is not a strength until it is harmonised and unified correctly, then it becomes a spiritual power," stated Sardar Vallabhbhai Patel.

India has the necessary personnel. It's always had the manpower, and a stronger feeling of togetherness would address a lot of our problems. GatiShakti contributes to this goal.