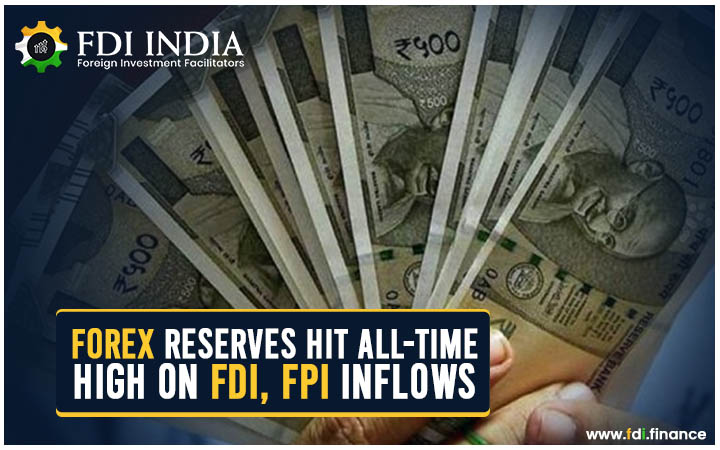 Even as the deadly COVID-19 continues to impact human lives, business activities and the global economy, foreign exchange reserves in India hit an all-time high of USD 90 billion in the week that ended on May 22 due to higher foreign direct investments (FDI) equity inflows, net inflow of funds by foreign portfolio investments (FPI) in domestic equities over the last couple of weeks and a sharp decline in import expenditure following the impact of the global pandemic on trade.

Due to the coronavirus outbreak, the foreign exchange reserves started to decrease after hitting a high of USD 487 billion in the first week of March. However, it has surged over the last four consecutive weeks and has increased by USD 10.5 billion from USD 479.5 billion on April 24 to USD 490 billion on May 22.

In the week that ended on May 22, the foreign exchange reserves increased by USD 3 billion. Data released by the Reserve Bank of India (RBI) shows that foreign currency assets grew by USD 3 billion, which resulted in the rise in the reserves.

“The rise in forex reserves is on account of the rise in FPI and FDI inflows and a reduction in import outgo. While the exports have also declined, the fall in imports is more since we are net importers and that helps the forex reserves,” said DK Pant, chief economist, India Ratings.

The surge in foreign exchange reserves have resulted in the strengthening of the value of the rupee against the US dollar. While the rupee had fallen to a low of 76.97 on April 21, it closed at 75.6 on May 29.

Amid a deadly outbreak, India managed to attract foreign direct investment equity inflows worth USD 73.46 billion— a surge of 18 per cent and the highest in four years, as per data released by the Department for Promotion of Industry and Internal Trade (DPIIT).