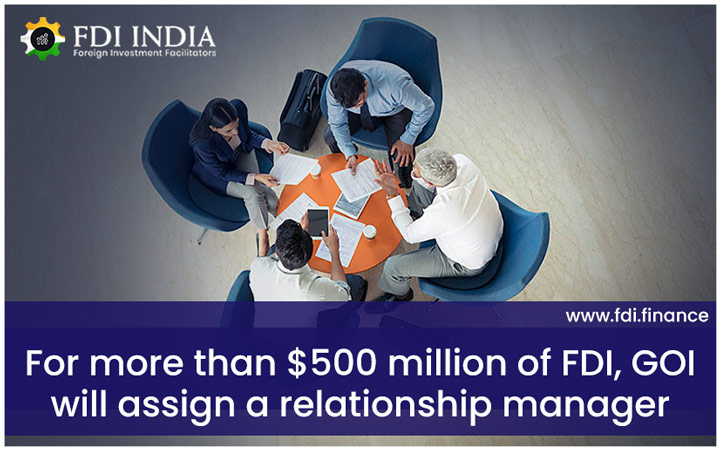 For More Than $500 Million of FDI, GOI Will Assign a Relationship Manager

For More Than $500 Million of FDI, GOI Will Assign a Relationship Manager

The Department for Promotion of Industry and Internal Trade (DPIIT) is aiming to introduce new reforms in the foreign direct investment mechanism in India in order to attract more equity inflows into the country.

Now, if you are a foreign investor who invests more than $500 million in an Indian business, you will get a designated person who will facilitate all clearances- right from the Centre to local bodies.

Previously, there have been several complaints by oversea investors who said their plans were hindered because of numerous clearances. As a solution to this, the department for promotion of industry and internal trade (DPIIIT) joined hands with invest India in order to come up with a new mechanism that will encourage investors to invest in the country.

Guruprasad Mohapatra, secretary of DPIIT said at an event on Monday, “Very soon, we will be announcing it. Within Invest India, another format in which we actually do hand-holding from investment query that anybody makes to operationalizing it in the field”

While this new step has been discussed with Commerce and Industry Minister Piyush Goyal, a formal approval is yet to come.

Foreign direct investment is a critical driver of economic growth and in order to attract more oversea investors, the government of India has taken several reforms in FDI policies across sectors like digital media, single brand retail trade, contract manufacturing, and coal mining.

These reforms come after India witnessed a drop of 1 per cent in foreign direct investments for the first time in 6 years in the fiscal year 2018-19.