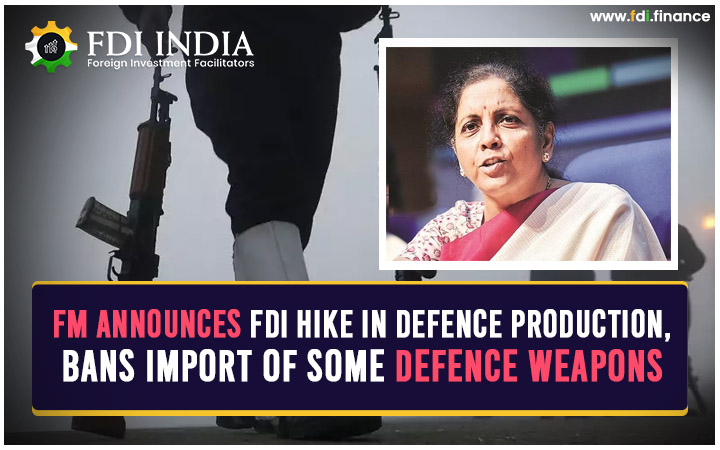 In order to enhance defence production from Make In India, the Finance Minister of India, Nirmala Sitharaman announced on Saturday, May 17 that the FDI limit in defence manufacturing is being increased by 74%, earlier it was 49%. The import of some weapons as well as platforms will also be banned.

The items which are under the ban can only be allowed to be bought within the nation, Sitharaman mentioned in her 4th tranche of the 20 lakh crore economic stimulus package.

She further said that indigenisation will also be imposed on some imported spares. Separate provisioning of the budget of the domestic capital procurement will be carried out, in order to decrease the major import bill of the defence.

The Ordnance Factory Board, functioning under the Ministry of Defence will be converted into an independent commercial company i.e. corporatized  for better management and eventually get listed within the stock market. The finance minister also said that the corporatisation won’t be privatisation.

A Project Management Unit (PMU) will also be set up to support the contract management for the time bound defence procurement and faster decision making process.

The limit of FDI under the manufacturing of defence under automatic route will be increased from 49% to 74% was said by Nirmala Sitharaman.