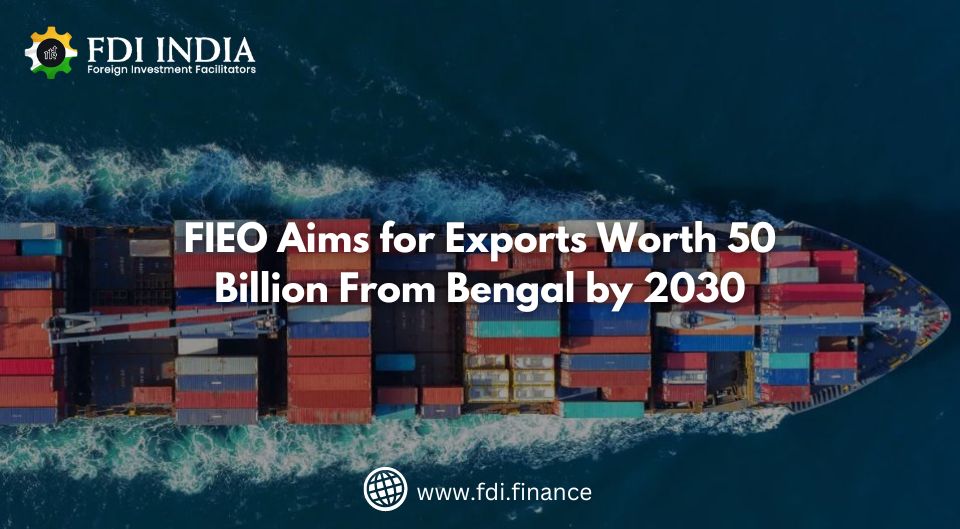 A prospective appeal to work closely with the West Bengal government for threefold growth on the state's exports to USD 50 billion sums out to be the prudent aim of the Federation of Indian Export Organizations. The apex body would also engage itself in producing market-oriented metrics to help boost the exports from the state.

A few of the challenges in boosting exports from Bengal have been apparent due to economic issues in the neighboring countries like Bangladesh and Nepal. They have been ardent in restricting the growth of exports from the state. FIEO Federation Of Indian Export Organizations had already signed an MOU with Madhya Pradesh as well as Uttar Pradesh for facilitating and enhancing the export markets.

According to media reports, a market metrics report, which would be a detailed document maintained product-wise, would help the state in attaining the high growth trajectory necessary for the goal that has been set. In addition, the arrangement would also help the policymakers and exporters to work on and take corrective measures to overcome shortcomings that are necessary to be settled for ramping up shipments.

Bangladesh and Nepal, which neighbor Bengal have traditionally accounted for about 27 % of Bengals' total exports. "In April-August 2022 of the current fiscal, total exports from the state were USD 5.83 billion. Of this USD 992 million was to Bangladesh and USD 540 million to Nepal," Sahai said.

The body has also been ardently organizing Export oriented knowledge-based skill development training programs and workshops in the country under the market access initiative schemes for 2022-23. Such training programs would be established in about 18 districts of Bengal. Such programs had already been conducted in Purba, Burdwan, and Murshidabad.

What matters in the whole process of ramping up exports is the identification of niche products in the tea and jute sector, the two main primary proponents who have had good export potential can now help new exporters as well. These new niche products can include products like leather, handicraft, and marine products, plus chemicals. Jute plays a significant role in the ramping up of imports from the state.

The exports of Indian jute and products manufactured from jute have increased over the years. Between 2015-16 to 2020-21, the total jute exports grew by 9%. In March and February 2022, Indian exported jute and floor coverings worth about US $49 million each. Some of the other jute-derived products are exported from India, such as shopping bags, gift articles, decorative fabrics, etc. The maximum share in the 2020-21 exports of jute and jute-made products was around US$163 million.

India has been a prime importer of jute-made products to countries like the USA, UK, Australia, Belgium, Egypt, Germany, Italy, Japan, and Saudi Arabia. According to the Jute board statistics, the export of all jute goods to the top 20 countries from April 2021-October stood at around 83%of the total exports valued at Rs 20,214.48, indicating a significant share in the international markets. Jute exports to the US accorded the highest place with RS 5163.87, followed by finance at about Rs 2303.13, and Ghana at RS1,811.26. During the same period, India's jute diversified products export contribution to some of the top 20 countries accounted for about 95% of the total exports of Rs 9316.05. The top five destinations for jute diversified product exports from India were the USA, France, The Uk, the Netherlands, and Spain.