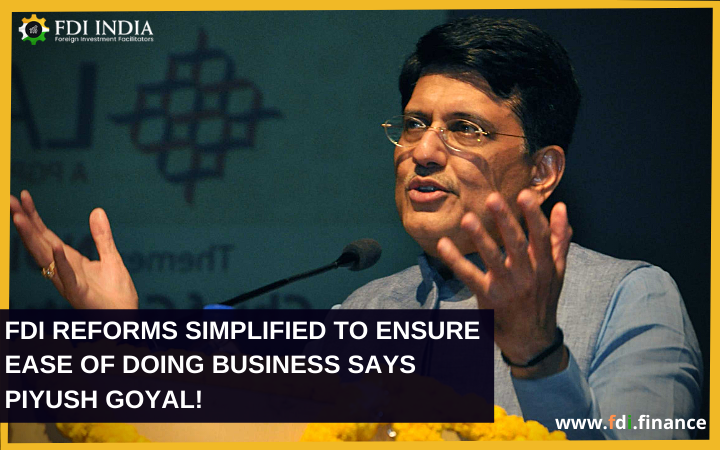 Piyush Goyal, Commerce and Industry Minister, said that the government is working towards reforming the overall mining sector which is done towards attracting Foreign Direct Investment (FDI) in sectors that are constrained at present.

Mining and FDI in certain sectors are turning towards making some reforms. We would simplify processes and also ensure that it is easier to do business in India. FDI rose to 13% with a record investment of $49.97bn in FY20 as compared to the $44.36 bn.

“A new industrial policy and forest policy are being planned. We are looking at banking sector and capital market reforms,” Piyush Goyal added and also told that the government is still working on ensuring 100% electrification of the railways.

As per the minister, the government is relooking all projects in terms of the post-COVID-19 world and there would be cost cutting. The costing of projects also includes the Mumbai- Ahmedabad bullet train have been impacted by the pandemic.

There are number of indicators that have proven a surge in the economic activity and shown a quick ramp-up. To bring back the economy and to recoup quickly in about 3-4 months with rapid growth we need to be vigilant and quick.

India can indulge in an immediate preferential trade agreement (PTA) with the UK and EU, with the long term goal of a free trade agreement (FTA). Piyush Goyal stated, “We can come on terms for the first 25-50 items. We will negotiate with no preconceived notions, no red lines. An early harvest with the UK can be done if they are willing to,” He said: “The UK can supply us with high quality cameras, automobiles and even spirits. I am coming for negotiation with an open mind”.

Similarly, India is currently discussing with the EU if an early harvest PTA could be done with a long term goal of an FTA.

Goyal also said that India is committed towards fair trade on the basis of reciprocity. On the issue of India banning Chinese apps, he stated that it is a security concern and companies have been asked to furnish certain details