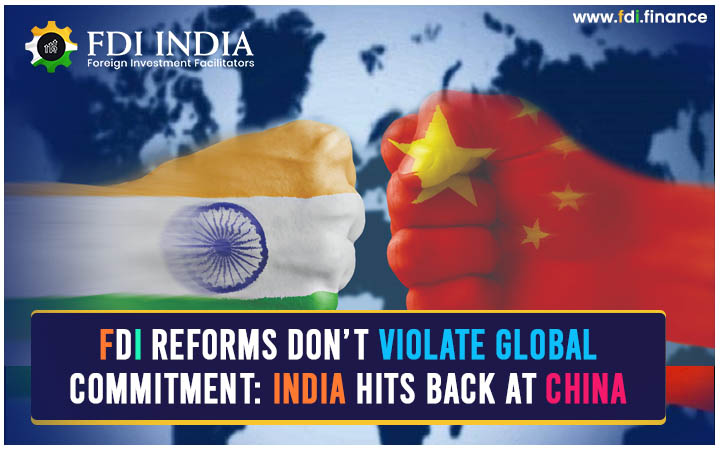 The country recently made amendments to its foreign direct investment policy to ward off the “opportunistic” Chinese takeover of Indian companies that have been rendered vulnerable due to the deadly COVID-19 pandemic that has so far infected more than 26,67,567 worldwide.

The mainland was left fuming over the FDI policy changes and took a dig at the Indian government, calling their reforms “discriminatory”. A day after China’s vocal outburst, India hit back, saying the reforms did not violate any global commitment as it did not bar investments from across the border but only mandated prior screening of proposals.

Apart from this, sources pointed out to a host of Chinese policies to argue that Beijing had a chequered record in following “discriminatory” policies against overseas entities.

As per the amended policy, investments by entities from countries that share a border with India will now require a clearance from the Centre. This means that countries that share a border with India would need a prior approval from the government in order to invest in the country, instead of investing under the automatic route where they simply have to inform the Reserve Bank of India (RBI) after getting the funds into the country.

Pakistan and Bangladesh, which share a border with India were already covered by the same rule. This reform is being seen to be targeted at China, prompting it to call it discriminatory. There have been reports of growing concerns around the globe of China taking advantage of the COVID-19 pandemic that first originated in its city of Wuhan last December. Chinese companies have taken to  reportedly buying out financially distressed companies that are a result of the deadly virus. In the wake of this, Australia and Germany have tightened their FDI policies in recent weeks to protect their companies.

Meanwhile, government officials said that there was no concern as the move would not impact goods trade and the latest press note did not fall within the illustrative list under Trade Related Investment Measures (TRIMS), which is also part of the WTO commitment.

The latest move in no way results in any cap on equity or impose any restrictions, simply the approval procedure has been modified.


Officials said India has not violated the Bilateral Investment Treaties (BITs) with either China or Nepal, which have been terminated. “The provisions only apply to investment already made into India prior to the termination of the treaty. So, no retrospective action has been taken to negate existing investments and there is no violation of the respective BITs. The same measure was there for Pakistan and Bangladesh for long and without any challenge,” an official said.

Even as China screams foul, the country is known to adopt policies that restricted access of foreign investors in sectors such as financial services, telecom and media. Indian IT companies for long have complained of market access restrictions, crippling their growth through non-tariff barriers.

Last December, China had also ordered state offices to remove foreign hardware and software within three years, even as Twitter and Facebook are blacked out.