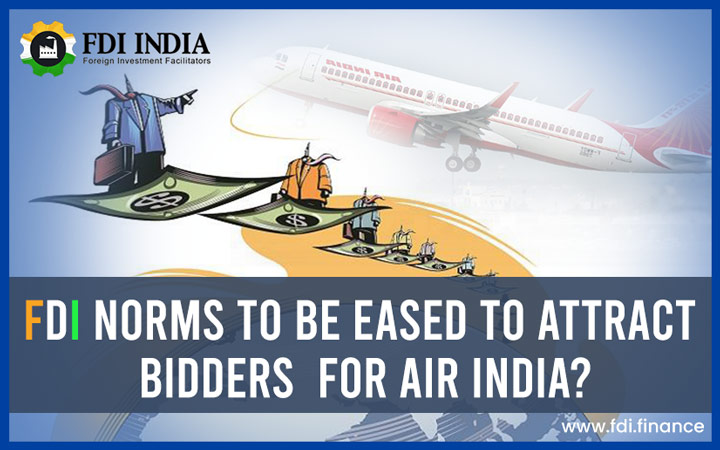 FDI NORMS TO BE EASED TO ATTRACT BIDDERS FOR Air India?

FDI NORMS TO BE EASED TO ATTRACT BIDDERS FOR Air India?

As per an official, The Department for Promotion of Industry and Internal Trade (DPITT) along with the civil aviation ministry are looking to liberalize foreign direct investment norms and regulations in order to attract bidders for debt-ridden Air India.

The government has been looking to sell the carrier airline for quite some time now, but has so far not been successful in finding any bidders. It has, now, once again, decided to call bids for sale for next month.

As per current foreign direct investment policies, 100 per cent FDI is permitted under the automatic route for MRO (maintenance, repair, and overhaul), aircraft purchase, and ground handling.

The official said, “But in airline operation, there is an issue of substantial ownership and effective control. So there, we are talking to the civil aviation ministry to see whether they are interested in liberalizing it.”

“It is felt that if you allow 100 per cent foreign direct investment (FDI), probably it will have a better effect on the Air India bidding prospects”.

The official further added “The civil aviation ministry is also aware of that. We are taking it up with them also.”

The group is going to focus its discussion on possibilities of further relaxing and simplifying foreign direct investment norms in order to encourage oversea investors to invest.

According to the official, the DPIIT is looking at easing and simplifying overseas direct investment norms and regulation where 100 per cent FDI is not allowed through the automatic route.

The Department for the Promotion of Industry and Internal Trade is checking with some investment bodies in order to understand their requirements and based on that the department will draft a proposal.

"Basic target is those sectors, where there is a government approval route and 100 per cent FDI is not there," the official said.

The meeting will see officials from different ministries such as defence, information and broadcasting, electronics and IT, and finance in attendance.

While most sectors of the Indian economy are open for foreign direct investment, there are some sectors where foreign investments are strictly prohibited such as Nidhi Company, cigars, cigarettes, and the tobacco industry, lotteries, gambling and betting businesses, investment in chit funds, atomic energy generation, and trading in TDR”s.

In her maiden budget in July, Finance Minister Nirmala Sitharaman said that the government is considering further opening up foreign direct investment in aviation, media (animation, AVGC) and insurance sectors with the aim of encouraging more overseas investment into the country.

This was done after FDI equity inflows decreased by 1 per cent for the first time in six years.