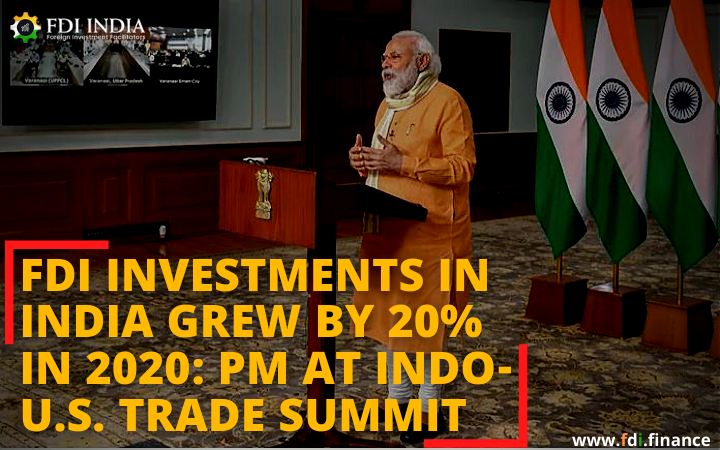 Prime Minister Narendra Modi, said that India has been able to attract 20 per cent more FDI than in 2019, while addressing the summit on Wednesday called ‘Indian Ideas’. The summit was organized to mark the occasion of its 45th anniversary, by the US-India Business Council.

While recounting the achievements of India so far, PM Modi said, "Every year, we are reaching record highs in FDI. Each year is significantly higher than the earlier one. FDI inflows in India in 2019-20 were 74 billion dollars. This is an increase of 20 per cent from the year before that."

The Prime Minister further added, "India and the USA are two vibrant democracies with shared values. We are natural partners,"

PM Modi, also stated that there is a visible improvement in the India's Ease of Doing Business ratings and the management of overall market that offers a very scalable and competitive.

"During the last six years, we have made many efforts to make our economy more open and reform-oriented. Reforms have ensured increased competitiveness, enhanced transparency, expanded digitization, greater innovation and more policy stability," the Prime Minister said at the 'India Ideas Summit'.

India's healthcare sector is booming very well faster than the fixed 22 per cent each year, it is the one that is now evolving into a gas-based economy and we are now focusing on building houses, roads and ports, PM Modi confirmed this while inviting more and more investment in various sectors.

He also stated that India has raised FDI cap for investment in insurance to 49 per cent. "We are raising the FDI cap for investment in defense sector to 74 percent," PM Modi added. The Prime Minister concluded his address by saying, "The US-India friendship has scaled many heights in the past. Now, it is time our partnership plays an important role in helping the world bounce back faster after the pandemic."