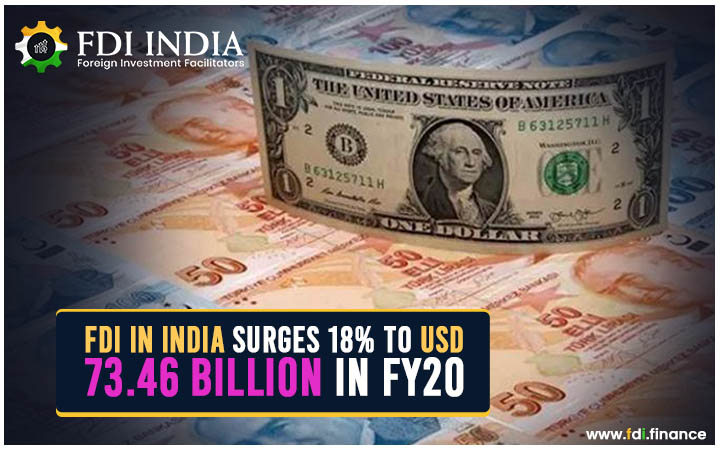 In the financial year, the total foreign direct investment equity inflows into India surged 18 per cent to USD 73.46 billion— the highest in four years, as per data released by the Department for Promotion of Industry and Internal Trade (DPIIT) on Thursday. Out of this FDI equity inflows via the Foreign Investment Promotion Board (FIPB), Resreve Vank of India’s (RBI) automatic route of through acquisition rose 13 per cent to around USD 49.98 billion.

“Total FDI has doubled from 13-14 when it was only $36 billion. This long term investment will spur job creation,” tweeted Goyal on Thursday.

The sectors that attracted the highest foreign direct investment in the fiscal year 2019-20 included, the services  sector with USD 7.85 billion, followed by the computer software and hardware industry with USD 7.67 billion, telecommunications received USD 4.44 billion, the trading sector attracted USD 4.57 billion and automobiles USD 2.82 billion. However, of this, investment in services, construction and chemicals was lower than the previous financial year.

Singapore retained its position as the biggest contributor of FDI in India, contributing to inflows of USD 14.67. However, this is a drop from the USD 16.22 billion Singapore contributed in 2018-19. Total FDI inflows, which include investment through the equity, reinvested earnings and other capital, stood at USD 62 billion in April-March 2018-19.