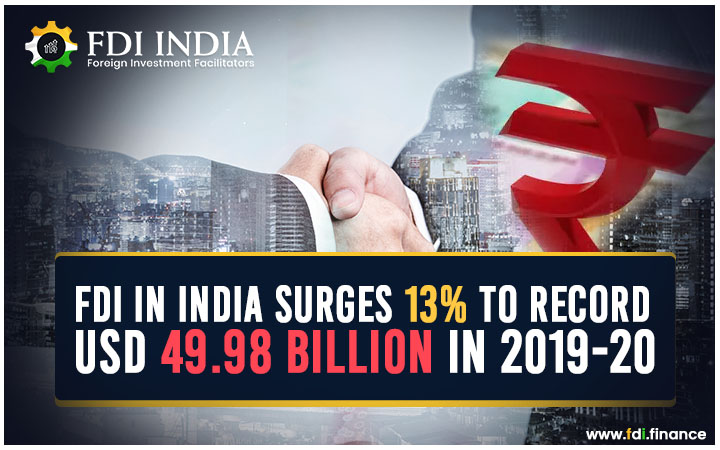 According to official data released on Thursday, foreign direct investment equity inflows into India surged by 13 per cent to a record USD 49.97 billion in fiscal year 2020 from USD 44.36 billion a year earlier. In the quarter ended in March, FDI equity inflows were USD 13.2 billion.

Singapore continues to retain its position of the highest foreign investor in India, accounting for USD 14.67 billion, followed by Mauritius at USD 8.24 billion, as per the data released by the Department for Promotion of Industry and Internal Trade (DPIIT). In the fiscal year 2019, India’s FDI equity inflows had decreased 1 per cent. Services, computer software and hardware, trading, telecommunications, and hotel & tourism were the top five sectors for foreign direct investment.

The Services sector received foreign direct investment worth USD 7.85 billion while investments in computer software and hardware were USD 7.67 billion, and in trading were USD 4.57 billion. Telecommunications got FDI worth USD 4.44 billion in FY20, and hotel & tourism attracted USD 2.93 billion of foreign inflows.

The month of January witnessed the highest inflow of USD 5.57 billion and February the least at USD 3.36 billion.

Maharashtra received the highest FDI equity inflows at 30 per cent investments clocking USD 7.26 billion. Karnataka and Delhi followed with 18 per cent and 17 per cent share, respectively.

Recently, the government of India amended the foreign direct investment policy in a bid to ward off opportunistic takeover of Indian assets by Chinese companies. In the reformed policy, investments from countries sharing a border with India will have to take a prior government approval.