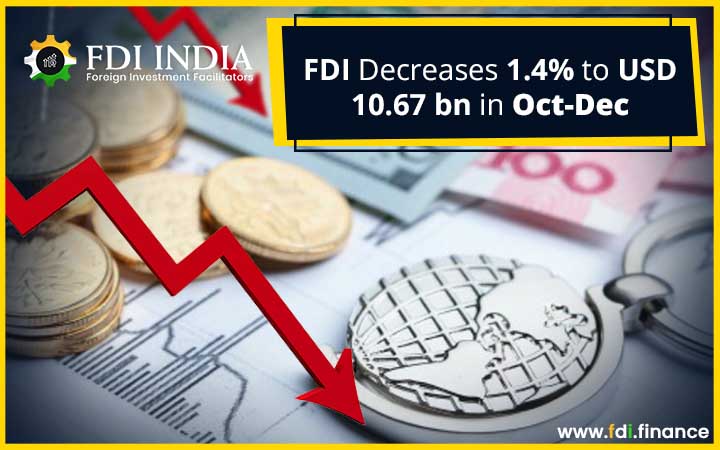 According to the data released by the government, foreign direct investment equity inflows into India decreased by 1.4 per cent to USD 10.67 billion (close to 76,800 crore) during the period between October and December.

Foreign direct investment in India during October-December of the fiscal year 2018-19 amounted to USD 10.82 billion. While FDI inflows between the months July and September in the current financial year were USD 9.77 billion.

Foreign investment increased 10 per cent to USD 36.76 billion during April-December as compared to USD 33.49 billion in the same period in the fiscal year 2018-19, revealed the data.

Maintaining its position as the largest source of FDI in India, Singapore made investments worth USD 11.65 billion in the current financial year. Singapore is followed by Mauritius (USD 7.45 billion), the Netherlands (USD 3.53 billion), Japan (USD 2.80 billion) and the US (USD 2.79 billion).

FDI is a critical driver of economic growth in the country. The Indian government has relaxed foreign investment norms in the country over the year to attract more overseas investors.

Today, the country has become one the most attractive destinations for foreign direct investments.