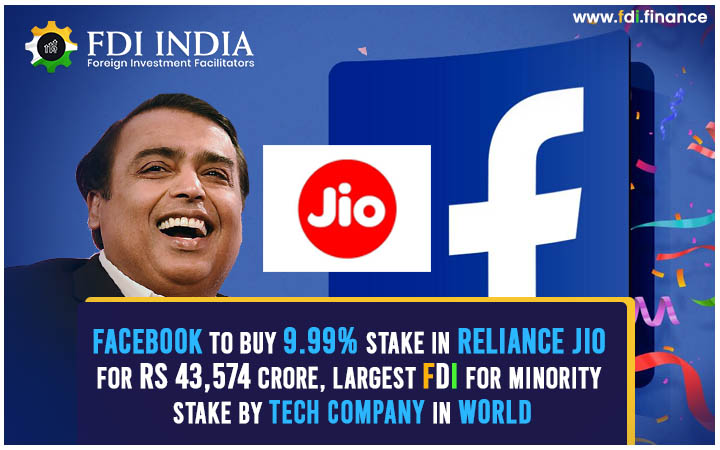 It is official! Social media giant Facebook is investing a whopping Rs 43,574 crore for a 9.99 per cent stake in India's oil-retail-telecoms conglomerate Reliance Industries Limited (RIL) led Jio Platforms. This investment is significant as it marks the largest investment for a minority stake by a technology company anywhere in the world, making it the largest foreign direct investment the country has seen in its tech sector, RIL confirmed on Wednesday.

"This investment by Facebook values Jio Platforms at Rs 4.62 lakh crore ($65.95 billion) pre-money enterprise value, agreed at a conversion rate of Rs 70 to a US Dollar. Facebook's investment will translate into a 9.99% equity stake in Jio Platforms on a fully diluted basis," RIL said.

Social media platform Facebook, in an official statement posted on its website said the investment "underscores our commitment to India, and our excitement for the dramatic transformation that Jio has spurred in the country."

Mukesh Ambani, Asia’s richest man and chairman and managing director of RIL said "the synergy between Jio and Facebook will help realise Prime Minister Narendra Modi's eDigital India' Mission with its two ambitious goals - eEase of Living' and eEase of Doing Business' - for every single category of Indian people without exception."

The digital transformation of India's neighbourhood grocers or ‘kirana' stores occupies a central role in the early outcomes expected from the Facebook-Jio deal.

This is being done with the aim of modernising India's small businesses.

Wholly-owned by Reliance Industries Limited, Jio Platforms brings together the company’s digital apps, ecosystems and a high speed connectivity platform under one branch.

This deal provides Facebook with the opportunity to penetrate the Indian market at a deeper level where its popular WhataApp messaging application alone has over 400 million users.

The daily active users (DAU) combined in India, Indonesia, and the Philippines are critical sources of growth for the company. As of December 2019, Facebook’s DAU’s were 1.66 billion on average. This figure does not include users on Instagram and WhatApp.

Launched in 2016, Reliance Jio quickly grew to become India’s leading telecom operator, thanks to its free voice calls and cheap data, with 388 million subscribers at last count. research data shows that 3 out of 5 smartphone users in the country use Jio network.

A month ago, speculating on the expected deal, a Financial Times report said "Mukesh Ambani's Reliance has emerged as the only Indian company capable of competing with US tech groups in the fast-growing Indian market, expanding from mobile telecoms into everything from home broadband to ecommerce.”

As is widely known, the company’s core business lies in oil refining and it successfully runs the world's biggest oil refining complex in Jamnagar. Apart from this, RIL is also India’s largest retailer with over 10,000 stores that sell products from a wide range of category— from groceries to clothing and electronics.

"In the post-Corona era, I am confident of India's economic recovery and resurgence in the shortest period of time. The partnership between WhatsApp and Jio will surely make an important contribution to this transformation," Ambani said.