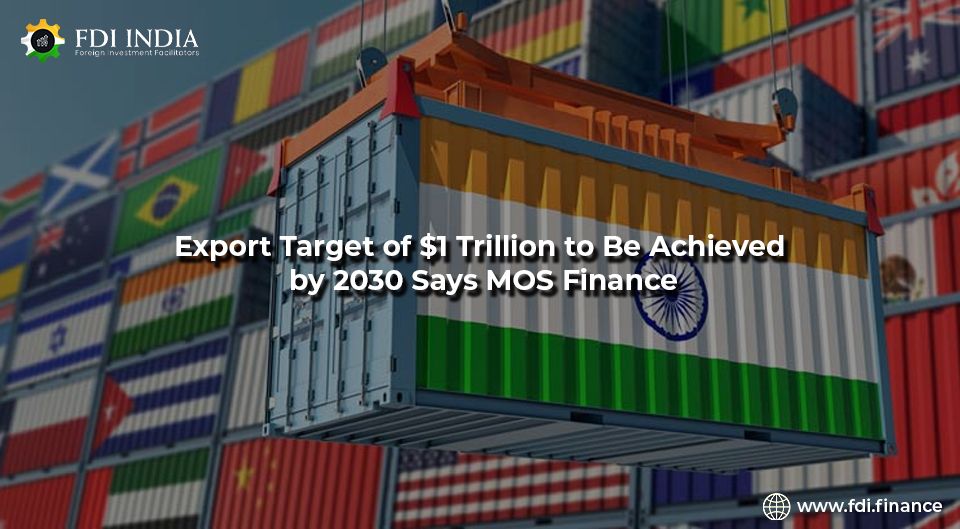 When the global and Indian economies, including the FDI flow, are under threat from several factors such as the Russia-Ukraine war, skyrocketing commodity prices, and high inflation rates - causing panic for governments around the world - it will become increasingly difficult to steer growth in India. As the spiraling economy continues to weaken, many economists and experts believe that India's export growth will slow down this year because of the global economic downturn.

Among this chaos, Minister of State for Finance, Pankaj Chaudhary, is very confident that the government will achieve its export target of $1 trillion by 2030. He represented his confidence by assuring that they will for sure reach the goal. He further said that last year they had record exports along with record services export of $419 billion and $254 billion respectively. He also said that he is very certain that the ambitious target of $1 trillion by 2030 will be met.

India is a fast-growing economy and therefore this statement is not too unbelievable but given the situation, it will for sure be difficult to overcome its effects and secure the much-required FDI for the development of multiple sectors.

Speaking about what the Government had accomplished after completing 8 years in power, Chaudhary emphasized that there was a lot of growth in the economy during this time. In the past eight years, they've managed to bring more people into the formal economy thanks to the partnership with JAM Trinity, he said further continuing that they’re also focused on building up infrastructure and public buildings.

Speaking about his ministry’s work, Chaudhary remarked, “The improvement in labor laws has also taken place which was the long impending industry demand. And because of the efforts of the government, we have improved a lot as far as ease of doing business is concerned. And that is why we are becoming an attractive destination for FDI and domestic investments,”