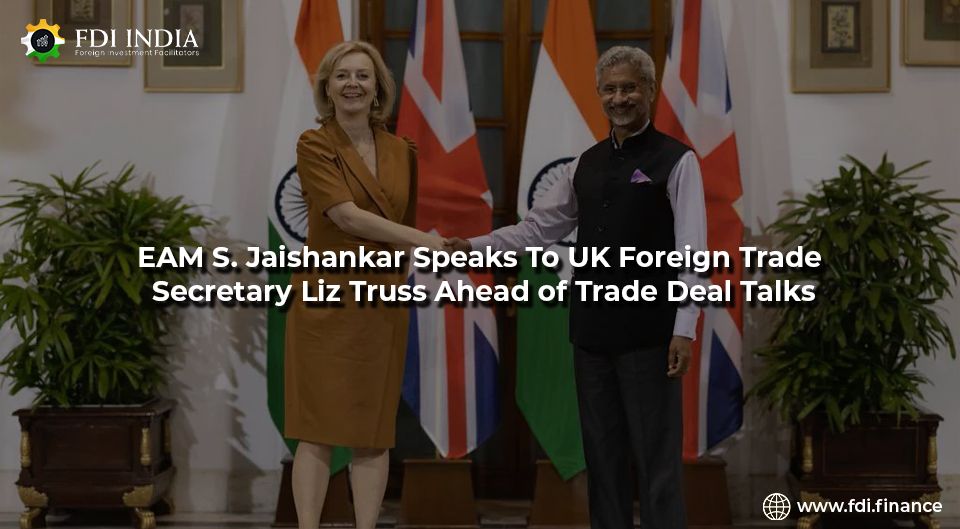 Indian External Affairs Minister Dr. S. Jaishankar spoke to his UK counterpart Liz Truss to discuss trade, investment and security of both nations. This telephonic conversation between the two countries came before an expected launch of negotiations for a huge India-UK free trade agreement (FTA).

Liz Truss tweeted, “Good call with @DrSJaishankar ahead of @annietrev visiting India this week for trade talks. We discussed boosting trade between UK and India, pipeline of new projects for British international investment, and closer defense and security cooperation.”

She referred to the British International Trade Secretary Anne-Marie Trevelyan’s scheduled two-day visit to India for the FTA talks.

Referring to the conversation with Liz Truss, Mr. Jaishankar tweeted, “A warm conversation with UK Foreign Secretary @trussliz. Discussed our shared interest in trade, investment and security. Look forward to welcoming her in India.”

Gaurav Singh, the founder of startup investment bank JPIN, believes a UK-India deal could be worth £100 billion.

“A trade deal with India could be worth as much as £50-100 billion, given India was a top two FDI source for UK, and UK has been a top six investor in India. It will open the door to 1.3 billion potential customers for UK businesses, and provide opportunities for business improvement, consolidation, foreign expansion and diversification in a rapidly growing market,” he said.

Ms. Trevelyan said, “The UK and India are already close friends and trading partners, and building on that strong relationship is a priority for 2022. I will be using my visit to drive forward an ambitious trade agenda which represents the UK’s Indo-Pacific tilt in action and shows how we are seizing global opportunities as an independent trading nation.”

Last year, India and the UK laid out a 10-year roadmap to enhance relations in vital areas such as defense and security, trade and economy, climate change, and people-to-people connect.

The Roadmap 2030 was agreed upon by Prime Minister Narendra Modi and his British counterpart Boris Johnson at a virtual summit.