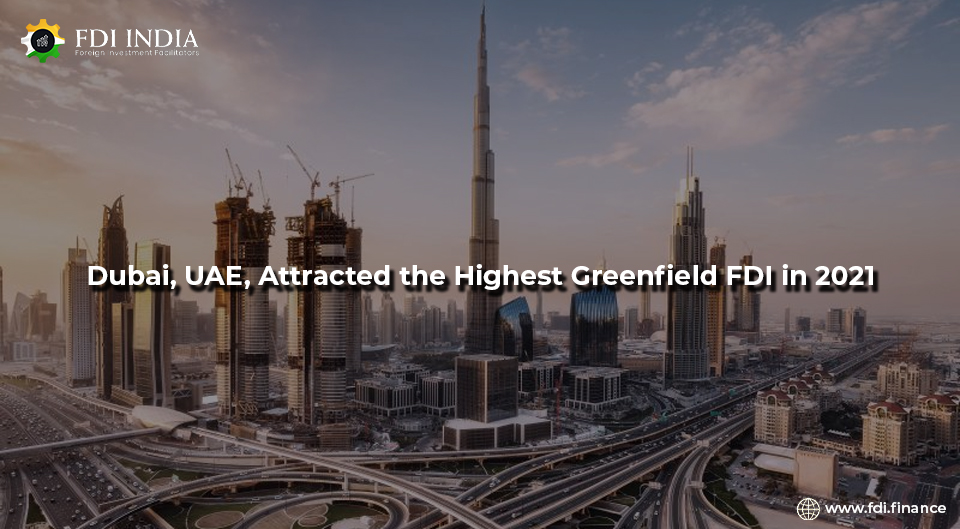 Dubai has come in first place in the world when it comes to attracting greenfield foreign direct investment (FDI) in 2021 with a record number of 418 projects.

Dubai’s global business-friendly environment and access to important markets across the Middle East, Africa, and Asia have been a significant catalyst for growth in recent years. The city has created a stable economic environment that provides businesses, entrepreneurs, and investors with promising opportunities as well as improves the overall quality of living in Dubai.

In fact, many small businesses are relocating from other cities to Dubai due to its centralized location and global network, which allow small businesses to expand internationally quickly and easily.

Unveiling the annual ‘Dubai FDI Results & Rankings Highlights Report 2021,’ which was published by Dubai Investment Development Agency (Dubai FDI), an agency of the Department of Economy and Tourism (DET), Sheikh Hamdan said that Dubai is a promising ground for talent, enterprise and investment.The report was based on data from the Financial Times Ltd’s ‘fDi Markets, which is a leading source of data on greenfield FDI projects.

Dubai ranked first in the Middle East and North Africa (MENA) region and third globally, up from fourth last year, for attracting foreign investment capital. In the case of reinvestment capital (from internal profitability instead of external funding), Dubai placed first in the MENA wealth area and third overall, up from fourth place last year (in 2013). For job creation from foreign investment, Dubai (based on its high amount of foreign businesses) came out as the first-place winner in the MENA region and fifth overall for creating new positions to support a business or two, up from sixth place last year.

The report revealed that investments in the Emirate reached 26 billion dirhams, according to data gained in 2021. This represents an increase of 5.5 percent compared to 2020. New projects increased by 36 percent, reaching 24,868 jobs in 2021 compared to 18,325 the previous year.

Dubai attracted 43 international headquarters (HQ) FDI projects in 2021, leading regionally in this category and ranking 2nd globally behind Singapore. Major cities such as London and New York have been left behind by Dubai as of late. In hosting global and regional headquarters of international companies, Dubai is ranked 3rd globally. As for outward foreign direct investment going from the Emirate, it accounted for a total capital flow amounting to Dh2.8 billion.