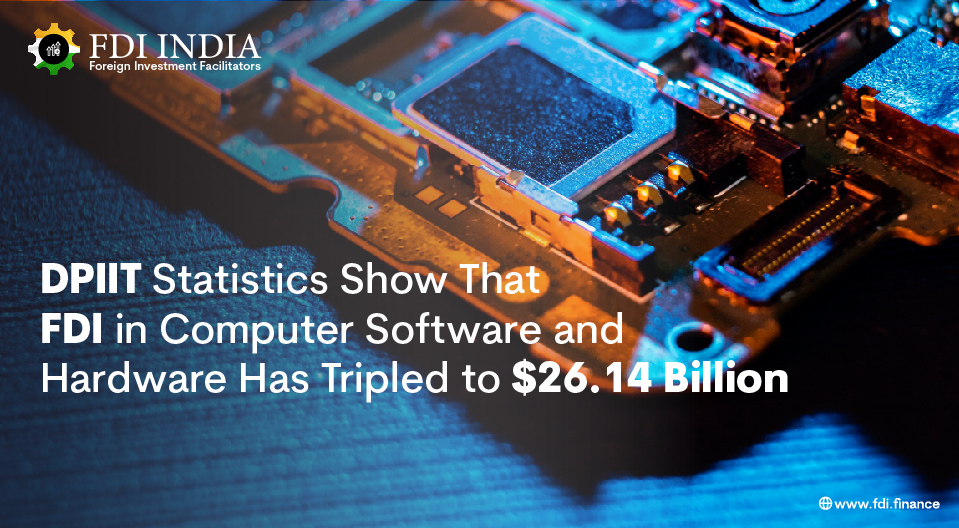 DPIIT Statistics Show That FDI in Computer Software and Hardware Has Tripled to $26.14 Billion

DPIIT Statistics Show That FDI in Computer Software and Hardware Has Tripled to $26.14 Billion

According to data from the Department for Promotion of Industry and Internal Trade, FDI in computer software and hardware increased by more than thrice to USD 26.14 billion in 2020-21, owing to solid expansion in the country's technology landscape.

According to the report, the sector received USD 7.67 billion in FDI in 2019-20 and USD 6.41 billion in 2018-19. The computer software and hardware sector contributed to almost 43% of India's total foreign inflows of USD 59.63 billion in 2020-21. According to Deloitte India Partner Rajat Wahi, the technology space in India is rapidly expanding due to the increasing end-to-end digitalization of enterprises.

It has intensified in recent months as firms have been driven to automate activities across the value chain. It is expected to accelerate further this year and over the next 2-3 years.

"This technology enabling is driving international investors to India," he added, adding that "hardware, software, and SaaS (software-as-a-service) are witnessing a major push in India's FDI."

Most technology practices are gaining traction, particularly in segments such as e-commerce, and a large portion of FDI is anticipated to be utilized to promote technology enablement throughout sectors and across the value chain, according to Wahi.

Construction development, automobiles, chemicals, hotels, and tourism are among the other industries where FDI has decreased last fiscal year.

According to Sandeep Jhunjhunwala of Nangia Andersen LLP, consumer spending on technology infrastructure has increased multi-fold due to COVID-19 demands for remote learning, work from home, and virtual healthcare.

"The technology solutions provided by Indian IT giants for various business and government efforts have created huge demand both offshore and onshore throughout the pandemic time," he said.

The production-linked incentive program and the Make in India drive for manufacturing IT hardware in India, according to Jhunjhunwala, have also enticed international investors to consider India as a greenfield or brownfield investment destination.