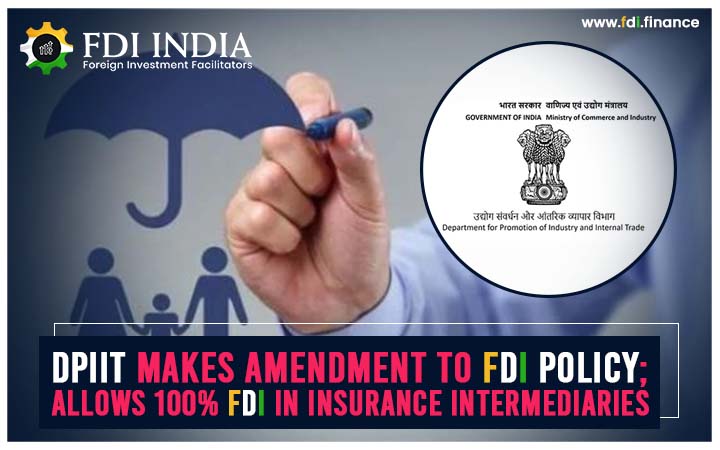 The Department for Promotion of Industry and Internal Trade (DPIIT) has made amendments to the Foreign Direct Investment (FDI) policy. Now, it allows 100?I in insurance intermediaries. This step will enable foreign brokerage firms to invest in the Indian insurance space.

Union Minister Nirmala Sitharaman made the announcement regarding the same in her Budget speech last year. She said, “FDI inflows into India have remained robust despite global headwinds...I propose to further consolidate the gains in order to make India a more attractive FDI destination.”

Until now, 49?I was allowed under the automatic route in the insurance sector. However, FDI for an insurance company is still at 49%

According to the new policy, any Indian company will not allow “aggregate holdings” by way of “total foreign investment” in its equity shares by foreign investors, which also includes portfolio investors, to surpass 49% of the paid-up equity capital of such Indian insurance company.

By allowing 100?I to insurance subsidiaries that allow them to buy a full stake in an Indian company, it will also make them enabled to sell and target new products to its clients and bring global practices in the country at the same time. As per the policy, an insurance intermediary that has foreign investors’ majority shareholdings will be incorporated as a limited company under the provisions of the 2013’s Company Act.

In addition to that, at least one person among the CEO or principal office or the chairman of the board of directors or MD of an insurance subsidiary should be living in India. It is also mandatory for such intermediaries to take the approval of the concerned authority before ousting dividends.

The policy also states that the foreign intermediaries are not allowed to make payments to any foreign group or subsidiary or promoter or associated entities or interconnected beyond what is authorized.