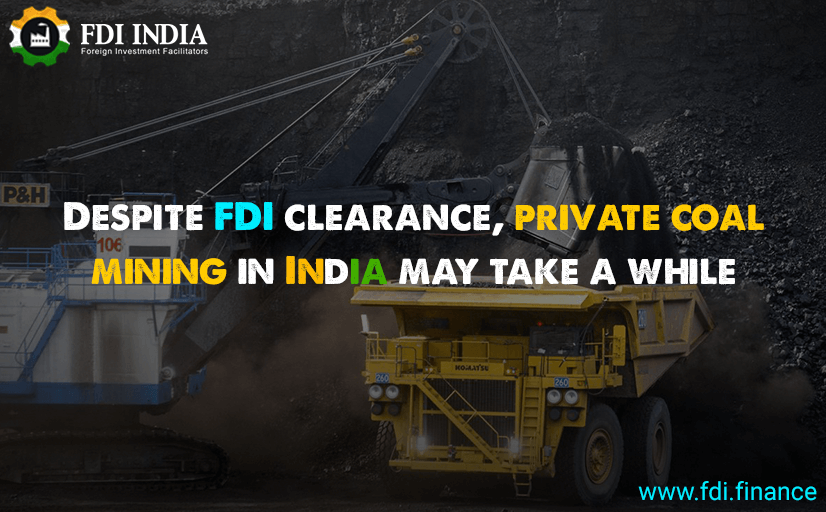 Despite FDI Clearance, Private Coal Mining In India May Take A While

Despite FDI Clearance, Private Coal Mining In India May Take A While

India has taken its very first steps towards privatizing coal mining in the country. However, it may be a while before India starts seeing active participation in the sector.

Commerce and Industry Minister Piyush Goyal said that 100 per cent foreign direct investment (FDI) in the coal mining and associated infrastructure has been approved by the government under the automatic route for approval. This decision comes after the current government decided to permit auctions of coal-bearing blocks to private parties for commercial mining.

So far, the coal mining sector has come under the exclusive domain of public sector Coal India ltd.

Prior to this, foreign direct investment was only permitted in captive coal lignite mining by power projects, steel, and cement companies. Apart from this, coal washeries were allowed to be set up on the condition that these washeries would not mine coal or sell washed coal in the market. Now, with a change in FDI norms and policies, 100 per cent overseas investment is allowed under the automatic route to set up such washeries, subject to provisions of a) Coal mines (special provisions) Act, 2015 and b) MMDR Act, 1957.

Anil Agarwal, chairman of metals and mining conglomerate Vedanta said, “100?I in mining is another progressive step announced by the government. This will send a positive signal to global investors and will give a significant push to the economy to reach the $5 trillion mark."

According to analysts, there is likely to be some initial hindrances to private investment taking place. Coal mines will be allocated through auctions and even after winning the auction, a miner is required to acquire the necessary land operations.