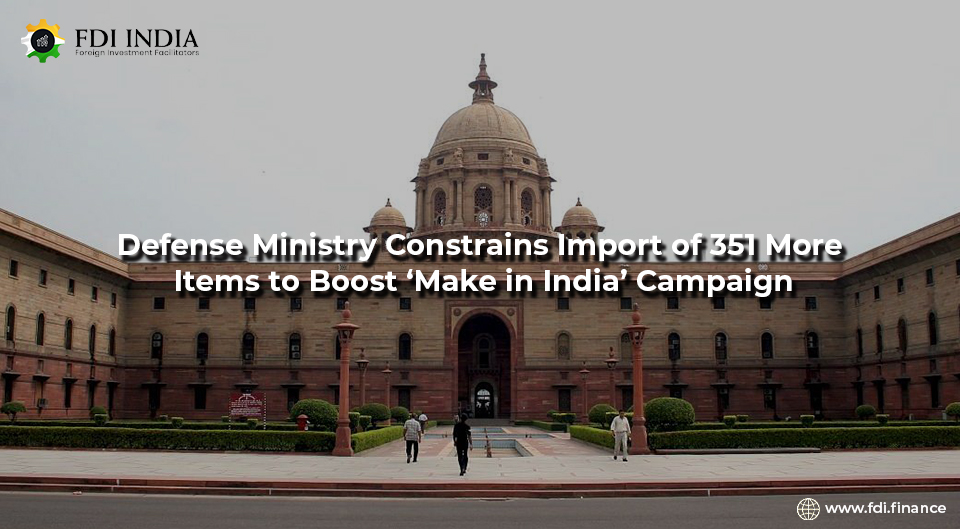 The Union Defense ministry has announced its plan to restrict the import of 351 defense systems and components in a phased manner, starting from December 2022, to promote indigenous defense manufacturing and save Rs. 3,000 crore in foreign exchange.

The import restraint on the 351 items includes components such as propellants, electrical parts, a torpedo tube launcher, missile approach warning sensor, a gun fire control system, and shells. The curbs will take place over the next three years.

These initiatives are being taken to encourage higher domestic defense manufacturing. A significant step in this direction was the revised limit of foreign direct investment (FDI) in the defense sector, which was raised to 74% from 49% under the automatic route.

India will halt imports of 172 items from December 2022, and 89 more systems and components will see import restrictions from December 2023. The remaining 90 items on the list will not be imported after December 2024. After the import limitation, these items can only be purchased from Indian companies.

“A positive indigenization list of sub-systems/assemblies/sub-assemblies/components has been notified by Department of Defense Production, Ministry of Defense, as part of the efforts to achieve self-reliance in defense manufacturing and minimize imports by Defense Public Sector Undertakings (DPSUs),” said an official statement from the department.

“This Aatmanirbhar initiative will save foreign exchange approximately equivalent to Rs. 3,000 crore every year,” the statement further added.

The government disbanded the 40-year old Ordnance Factory Board (OFB) and combined to form 41 factories managed under seven new state-owned companies. These companies will manufacture defense hardware such as ammunition, heavy weapons and vehicles.

India is among the world’s largest defense importers, and it is estimated that close to $130 billion will be spent on defense imports over the next five years.

The defense ministry has set a goal of $25 billion in turnover in defense manufacturing over the next five years which includes $5 billion worth of defense exports.