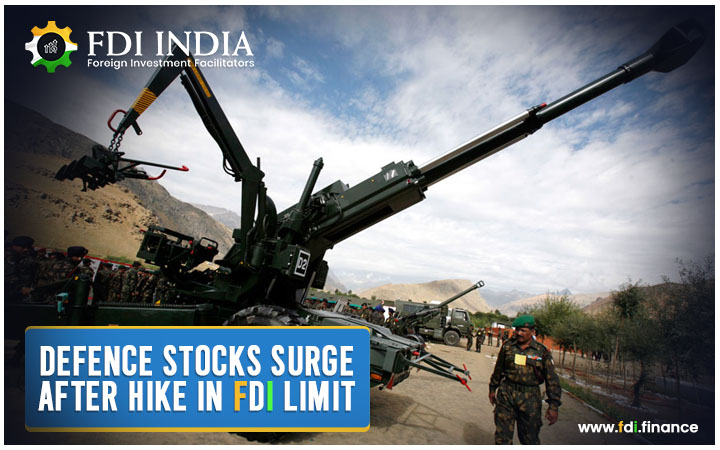 On Monday, shares of companies involved in defence manufacturing increased after the Centre announced a hike in foreign direct investment (FDI) limit under the automatic route of approval from 49 per cent to 74 per cent. This move by the government came as a part of the special economic stimulus package announced to help the economy amid the deadly COVID-19 pandemic.

Bharat Forge, Astra Microwave Products and Walchandnagar Industries from the private sector were up between 3 per cent and 5 per cent, as compared to a 3 per cent or 958 points decline in the S&P BSE Sensex.

The hike in the foreign direct investment limit in the defence sector was part of the structural reforms announced by Finance Minister Nirmala Sitharaman under the five tranches of the overall Rs 20 lakh crore stimulus that came into force to make India more “self- reliant.” The reform is likely to boost the government's Make in India campaign in the defence sector.

The FM said that the Centre will be banning imports of some weapons to promote indigenous production. While sprucing at a press conference, she said that a list of weapons/platforms will be notified for the import ban. She also added that the government is looking to improve autonomy and accountability in ordinance.

Last week, Prime Minister Narendra Modi announced the 20 lakh crore economic package in a bid to make India more self reliant in these testing times of COVID-19 crisis. The coronavirus pandemic has slowed down economic activities by bringing the world into a standstill. The resulting lockdown in a bid to stop the virus from spreading has negatively impacted the global economy.