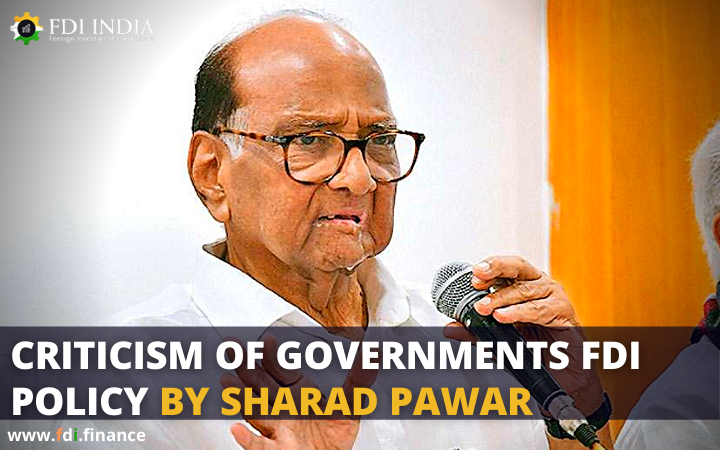 The Modi government’s FDI policy has received a backlash from Sharad Pawar. During the pandemic, the economy of the country has taken a hit and the prices of airlines have also increased.

He shed light that if any foreign airlines invested in the airlines then there would be cartelization of the airfares. In the discussion, he further talked about the uncertain economic condition of Air India.

The government’s FDI policy was criticized by the FORMER Union agriculture minister Sharad Pawar while speaking to media in Pune. He criticized the government’s decision for allowing a 100?I in the defense sector as according to him this move might jeopardize the security of the nation.

“FDI is necessary for economic development and industrialization of the country. However opening up sectors like defense and civil aviation is not right,” Former Union agriculture minister Sharad Pawar said.

In the scenario of a foreign airline investing in India, this might lead to over thousands of workers in airlines becoming jobless according to Sharad Pawar.

Earlier, Bharatiya Mazdoor Sangh which is a right-wing labor organization earlier had taken out protest against the government’s partial FDI policy but now they are silent and this has been questioned by Pawar.

Sharad Pawar also led the meeting which was organized by the Maharashtra Cooperative Sugar Factories Federation to address the issue of the conclusion of wages of the sugar mill workers as the earlier wage agreement had expired two years ago and the new agreement has not yet be made.

According to the former minister, the agreement has not been renewed due to the situation of the sugar sector that needs to be considered.

“The upcoming crushing season would see many mills abstaining from crushing in want of cane. It is estimated that only five out of the 37 mills in Solapur would go for crushing and the situation would be the same in Marathwada as well,” Pawar said.

An extraordinary crisis is being faced by the sugar sector and the stakeholders are required to think about the measures to eradicate the issue, for this discussion even a meeting has been scheduled for all the stakeholders.