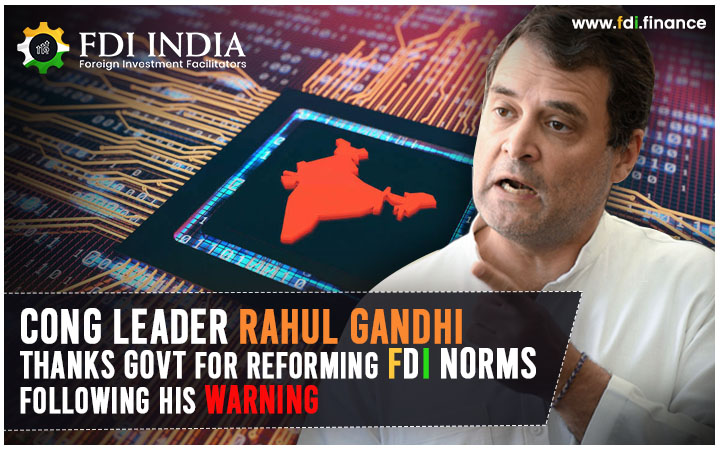 On Saturday, Congress leader Rahul Gandhi extended his thanks to the central government for reforming the foreign direct investment or FDI policy following his warning on the takeover of Indian companies by foreign players during the ongoing COVID-19 epidemic that has gripped the world.

The deadly coronavirus, which first originated in the Chinese city of Wuhan last December has resulted in complete or partial lockdown of economies across the globe; therefore bringing business to a halt.

Rahul Gandhi took to his official Twitter handle and said: "I thank the Government for taking note of my warning and amending the FDI norms to make it mandatory for Government approval in some specific cases.”

On April 12, the Congress leader had brought into attention the issue of an alleged takeover of some Indian firms by foreign investors after these firms faced vulnerability in the face of an economic slowdown.

"The massive economic slowdown has weakened many Indian corporates making them attractive targets for takeovers. The Government must not allow foreign interests to take control of any Indian corporate at this time of national crisis," he had written on Twitter.

This warning came right after the People's Bank of China (PBoC) invested in HDFC and took up a stake in the finance company.

So far, India has reported 17,265 cases of the novel virus. In the wake of increasing COVID-19 cases, Prime Minister Narendra Modi had increased the initial 21-day lockdown period by more than a fortnight. The lockdown is scheduled to come to an end on May 3.

Meanwhile, the virus has infected over 24,07,340, hence putting a pause on normalcy. Health authorities are of the opinion that a vaccine is the only way of bringing life back on track.