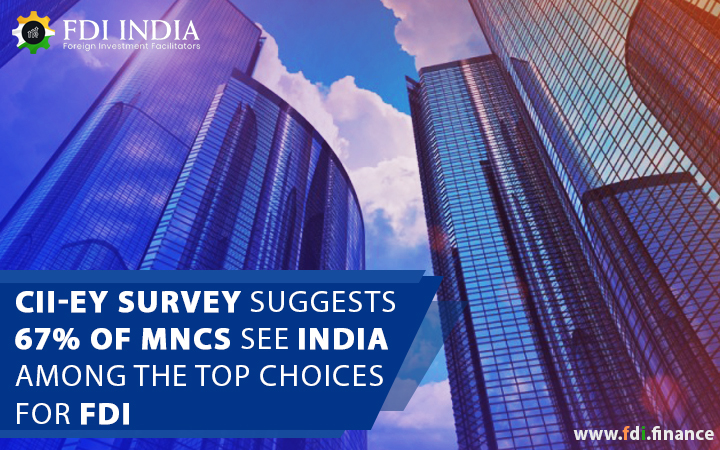 In a latest survey conducted by the multinational corporations (MNCs), India appears to be ahead in a choice for foreign direct investment (FDI). According to an another survey regulated by Confederation of Indian Industries (CII) and EY, India is expected to grab a position in top three destinations for FDI inflows in coming five years.

The three key factors that make India as their recommended destination are its market potential, political firmness and skilled human resource, said the respondents. Not only theses but the accessibility of cheap workforce, policy reforms and accessibility of raw materials are also the additional factors that help in India’s chances for becoming preferred destinations. In the recent times the policies regulated by the Indian government such as corporate tax cut, schemes encouraging small players to participate, labour law played a vital role in emerging India as the favourite destination for FDI.

“The CII-EY survey results strongly indicate that India will be the next global investment hotspot with a high proportion of MNCs placing it at the top of their investment agenda. The recent major structural reforms, proactive Government processes and the quick pickup in economic activity following Unlock measures are contributing to global investor interest,” said Chandrajit Banerjee, director general, CII.

Efficacious simplification of the labour law, FDI policies are prised by 40 per cent of foreign MNCs while according to 52 per cent Indian based organization the corporate tax cut would prove to be a crucial step towards future investments.

FDI inflows have been impacted since the pandemic hit the economy. FDI inflows into India during April-June quarter has been reduced from USD16.33 billion to USD 6.56 billion by 60 per cent, According to Department for Promotion of Industry and Internal Trade.

Apart from investment in R&D, innovation and tax reforms, there are a few measures suggested by the respondents that will helps improve India’s prospect. Infrastructure development, rapid clearance, enforcement of simplified labour law and accessibility of human resource are the prime affairs that a company wants the government to focus on.