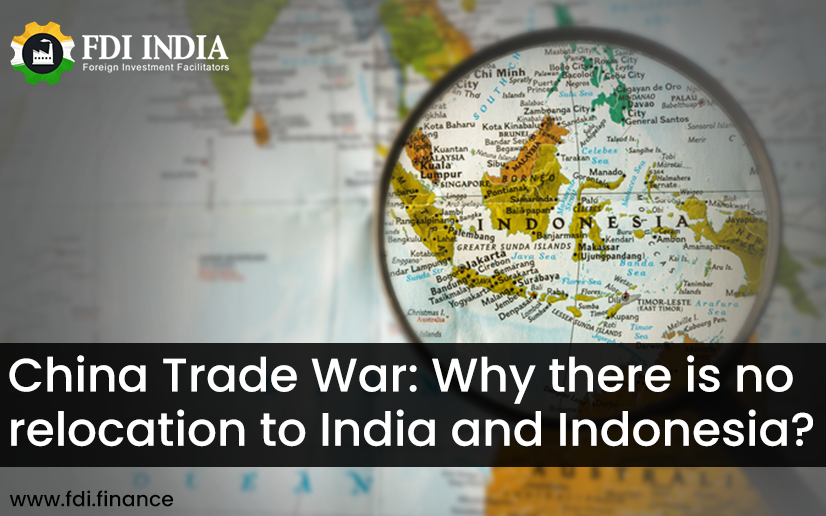 China Trade War: Why There Is No Relocation To India And Indonesia?

China Trade War: Why There Is No Relocation To India And Indonesia?

The ongoing trade clash between the US and China continues to intensify, charges are making exports from China at higher and higher rate for the importers of US. 56 companies moved their production from China between the time period of April 2018 and August 2019. Out of those companies, only three went to India and two to Indonesia. This was reported by the findings of Japanese Financial group, Nomura.

Out of those 56 companies, 11 moved to Taiwan, 8 to Thailand and 26 shifted to Vietnam. Many firms are also looking for new locations for their manufacturing operations. Some of them hesitated to relocate as relocation would mean a lot of hassle as well as uncertainty. But the additional US tariffs imposed on Chinese goods tipped them off the scales.

India and Indonesia both have the perfect demographic to become powerhouses of global manufacturing to give a strong competition to China that presently makes 1/5th of the world’s goods. So, what can be the reason that these two countries are not getting their fair share of firms relocating from Noida?

Both the countries’ GDP growth rates are high as compared with other major global economies but according to economists, India and Indonesia are underperforming regarding Foreign Direct Investment in manufacturing. For this reason, they are even nicknames “sleeping giants”.

As we know, FDI serves as a confidence for foreign investors in the success of economic reforms. They are a sign to demonstrate how much are these foreign corporations keen to commit their long-term investments in a country. FDI is a basic necessity for any developing economy to support employment, absorb additional labour supply and build financial gaps. But sadly, India only gibes 0.6 percent of GDP in manufacturing FDI. And Indonesia only has one percent up in this as compared to India.

A firm generally relocates to a place where there is ease of doing business. And that is why both India and Indonesia need to spend more on infrastructure construction, reform land, labour laws and offer tax breaks for all the foreign investors. This is necessary for every economy in order to utilise their full potential.

The two countries do have a miserable investment in FDI but they both have an awareness about what should be done and are moving in the right direction. Indonesia announced that they have an intention to spend 40 percent of their yearly GDP on infrastructure over 5 years but funding it is a problem due to feeble FDI inflows.

India is really thankful to companies like Apple and Samsung who are making some of their mobile phones in India. Apple has already manufactured some of their iPhone components ans soon expects to build the newer versions of mobile phones this year. Noida’s Samsung factory is one of the biggest in the world and exports 30% of what it makes.

PM Modi first declared his aim in 2014 to increase the manufacturing share of GDP to 25 percent by 2025. And yes, there is progress but more has to be done if the target is wished to be achieved in the next 6 years.