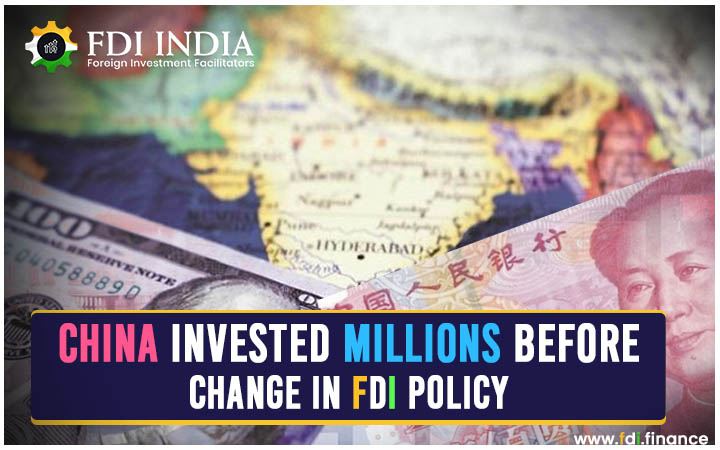 Amendments made by the government to the foreign direct investment policy in a bid to ward off the “opportunistic” Chinese takeover of Indian companies may result in an investment slowdown. Top players in the mainlands’s tech sectors such as Alibaba and Tencent have been pouring millions of dollars in Indian startups. These investments, however, are likely to slowdown after reforms in the FDI policy where investments by entities from countries that share a border with India will no longer come from the automatic route.

Countries that share a border with India would need a prior approval from the government in order to invest in the country, instead of investing under the automatic route where they simply have to inform the Reserve Bank of India (RBI) after getting the funds into the country.

Now, exits from existing from deals and investments which results in change of beneficial ownership would also require a government nod.

The latest move came after the Housing Development Finance Corp. Ltd (HDFC) noticed the raising stake of the People's Bank of China (PBoC) in India's largest non-banking mortgage provider HDFC. Alarmed by the possibility of hostile takeovers of India's most valued companies at a vulnerable time due to the deadly COVID-19 pandemic that has pushed businesses in an uncertain territory, the government introduced changes to the FDI policy.


"Any fresh investment from China would under the recently issued press note require a government approval which would lengthen the transaction time. This could impact any fresh investment in Indian companies with existing Chinese investors having a put/ call option or were courting Chinese companies for big investments," said Payal Parikh managing partner of ANB Legal.

Parikh added that even exits could be impacted by the new move.

Some of the top Indian tech companies that have Chinese investors include PayTm, Ola, BigBasket, Byju's, Dream11, MakeMyTrip and others. Any fresh investment in these companies from existing investors will face additional scrutiny, increase approval times and consequently lengthen the transaction completion timelines.

As per a report by think tank Gateway House published in February 2020, tech investors from China have investment an estimated USD 4 billion into Indian start-ups.

"Such is their success that over the five years ending March 2020, 18 of India’s 30 unicorns are now Chinese-funded. TikTok, the video app, has 200 million subscribers and has overtaken YouTube in India. Alibaba, Tencent and ByteDance rival the U.S. penetration of Facebook, Amazon and Google in India. Chinese smartphones like Oppo and Xiaomi lead the Indian market with an estimated 72% share, leaving Samsung and Apple behind," the report said.

"Existing investments, especially Chinese investments in the digital economy space, as well as the personal electronics space will be grandfathers and not require government approval, any further investments by Chinese firms (either directly or indirectly) will now take place through the approval route," said Atul Pandey, Partner, Khaitan and Co.

There have been reports of growing concerns around the globe of China taking advantage of the COVID-19 pandemic by buying cheap, distressed assets. Chinese companies have taken to buying out financially distressed companies that are an inevitable and unfortunate result of the deadly virus. In the wake of this, Australia and Germany have reportedly tightened their FDI policies in recent weeks to protect their companies.