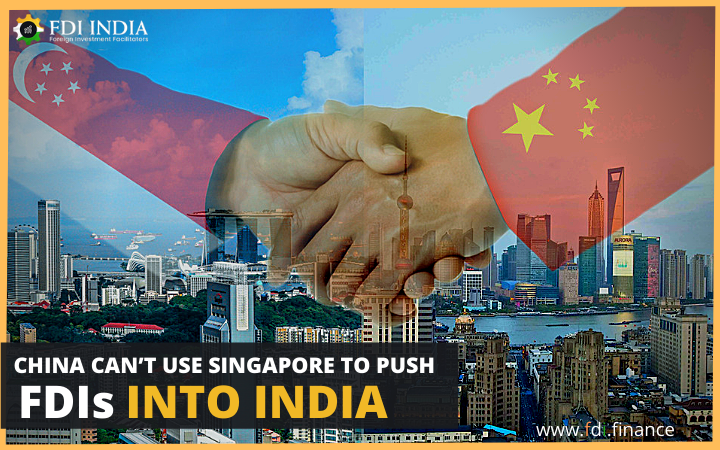 China Can’t Use Singapore to Push FDI into India

China Can’t Use Singapore to Push FDI into India

India changes its stance on the scrutiny over foreign direct investments (FDIs) from Singapore, owing to the growing apprehensions that the cash-rich Chinese companies could route towards for their investments going through the island nation to bypass New Delhi’s stringent FDI policy for bordering countries.

Singapore which recently replaced Mauritius as the largest source of FDI for India in FY19 which accounted for almost 30% of inflows into equities in the last fiscal. The government would likely be stepping up the vigil in such a manner that the overall flow of a genuine FDI from Singapore doesn’t face any troubles in the process. While nothing is formally announced as of now, yet, the informal deliberations have started coming to reality in some of the quarters, as confirmed by one of the sources.

FDI from Hong Kong are often considered a proxy for Beijing. It is expected that the vigilance will be tightened up in this sphere as well.

On April 18th India altered its FDI policy to ensure that no opportunistic takeovers or business acquisitions of domestic firms in India are made by Chinese. The government stated that such mergers and proposals would require government clearance. This move was initiated in the wake of COVID-19 pandemic. The recent border misadventure of China has been the driving force behind this strict scrutiny. It has been noted that FDI from China remained abysmally low.

As per the data noted by December 2019, China’s cumulative investment exceeded by $8 billion out of which only 30% were FDI. China has now entered the Indian market via venture investments in various start-ups and also entered the online world and had gained various investments through different ways.

It has been observed that cash-rich Chinese firms have been making investments in India via city nation which has a free trade pact with New Delhi.